Apple has activated a "dormant software lock" on its latest iPhones to discourage battery replacements that aren't undertaken by Apple, according to iFixit.

The teardown group has discovered that an iPhone XS, ‌iPhone‌ XR, or ‌iPhone‌ XS Max that has had its battery swapped by anyone other than Apple or an Apple authorized service provider will now display a message saying their battery needs servicing. 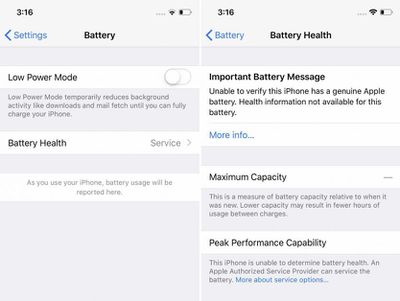 If you replace the battery in the newest iPhones, a message indicating you need to service your battery appears in Settings > Battery, next to Battery Health. The "Service" message is normally an indication that the battery is degraded and needs to be replaced. The message still shows up when you put in a brand new battery, however. Here's the bigger problem: our lab tests confirmed that even when you swap in a genuine Apple battery, the phone will still display the "Service" message.

Put simply, Apple is locking batteries to their iPhones at the factory, so whenever you replace the battery yourself—even if you're using a genuine Apple battery from another iPhone—it will still give you the “Service” message. The only way around this is—you guessed it—paying Apple money to replace your iPhone battery for you.

The message appears in both iOS 12 and iOS 13 beta, and prevents the user from accessing the Battery Health features. Instead they see an "Important Battery Message" which reads: "Unable to verify this ‌iPhone‌ has a genuine Apple battery. Health information not available for this battery."

iFixit notes that the message doesn't appear to affect the functionality of the battery, but makes it harder to know when a replacement battery installed by a third-party needs to be replaced.

YouTube channel The Art of Repair has discovered the source of the message to be a Texas Instruments microcontroller installed on the battery itself, which authenticates the battery as an Apple one and provides the ‌iPhone‌ with information about battery capacity and temperature.

Apple and other authorized service providers likely use Apple's own RepairCal diagnostics software to reset the "Service" status when it undertakes an ‌iPhone‌ battery replacement – an in-house procedure that's obviously not available to a third-party.

iFixit says the message appears designed to deter battery replacements using third-party repair kits, like the one sold by iFixit, and to discourage customers from getting a third-party repair shop to swap out their ‌iPhone‌ battery.

Apple would probably argue it is doing it out of safety concerns surrounding the replacement of swollen or damaged batteries. Nonetheless, it places further restrictions on the options available to ‌iPhone‌ users looking to get their battery replaced by anyone except Apple.


The practice harks back to a more damaging third-party ‌iPhone‌ repair controversy: Error 53, widely publicized in 2016, caused some ‌iPhone‌ 6 users who had the Home buttons on their iPhones fixed by a non-Apple technician using non-original parts to see their iPhones bricked following a software update.

However, after public outcry, Apple released a software update restoring functionality to bricked iPhones. Following the software update to unbrick iPhones, Apple claimed that the error 53 issue was meant to be a factory test and never should have impacted consumer devices.

Update: According to an Apple service document obtained by MacRumors, Battery Health info is unavailable for any ‌iPhone‌ XS, XS Max, and XR that has a non-genuine battery and is running iOS 12.1 or later.

chucker23n1
This article has a weird vibe.

Where does this "lock the software"?

will now display a message saying their battery needs servicing.

It doesn't say that.

it does make it harder to know when a replacement battery needs to be replaced.

Well, yes. How is Apple supposed to say when a third-party-produced battery needs servicing?

It doesn't really do that, though. It merely says that it can't really present diagnostic information about the battery. That's all.
Score: 90 Votes (Like | Disagree)

emmab2006
Louis Rossman Already pointed this out. Apple is a Disgusting company when it comes to the right to repair. we dont own our products. as far as apple are concerned we lease them from them. and we have ZERO rights
Score: 77 Votes (Like | Disagree)

jameswilby
Oh yeh... get yourself a big bowl of popcorn for this one
Score: 48 Votes (Like | Disagree)

Radon87000
Its planned obsolescence to get people to buy Apple’s batteries to generate more revenue.
Score: 38 Votes (Like | Disagree)

Expos of 1969
This company is just going from bad to worse. The greed has no limit. Shameful. No morals remain. Getting in bed with the disgusting Goldman Sachs for the credit card was a clear indication that Apple under Cook will get into any sewer if it can make a buck.

Hopefully karma will give Apple and Cook their just desserts in the not too distant future.
Score: 37 Votes (Like | Disagree)
Read All Comments