Microsoft contractors are listening to conversations between users on Skype who use its translation feature, according to Motherboard. This is done only if users are performing a translation function in Skype and not during any other typical Skype voice or video call. 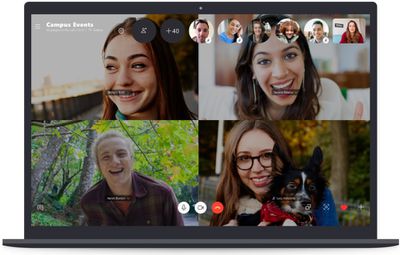 These contractors (who mostly work from home) do manual translations of Skype audio conversations, sent by Microsoft along with a series of approximate translations generated by Skype's AI program. The contractor has to select the most accurate translation or provide their own, and they send the information back to Microsoft.

Microsoft warns users that it analyzes audio of translated calls in Skype to improve its services, but it does not mention that some of the analysis will be done by humans. The translation feature lets users perform real-time audio translations during phone and video calls, powered by artificial intelligence.

"The fact that I can even share some of this with you shows how lax things are in terms of protecting user data," a Microsoft contractor who provided the cache of files to Motherboard, said.

The contractor said, "I generally feel like that while we do not have access to user identifiable information, that if Microsoft users were aware that random people sitting at home in their pajamas who could be joking online with friends about the stuff they just heard that they wouldn't like that."

According to Microsoft, the company's terminology on its Skype translator feature and on Cortana are clear and straightforward in how it uses voice data to improve each service. "We strive to be transparent about our collection and use of voice data to ensure customers can make informed choices about when and how their voice data is used," the company said.

Microsoft also said that the audio data sent to contractors is through a secure online portal, and that it ensures any identifying information (like the user's name or device identification numbers) are removed. Despite all of this, Microsoft's terminology still doesn't mention that human workers might listen to your Skype translation conversations, or Cortana commands.

Great, an illegal wiretap. What if they hear about a plot to injury and/or kill others? Do they ignore or tell someone about it.

You’re right. I frequently discuss my evil killer plans over Skype audio with somebody who speaks in a different language that I can’t understand. This news has made me rethink my otherwise inconspicuous behaviour.
Score: 10 Votes (Like | Disagree)

This is done only if users are performing a translation function in Skype and not during any other typical Skype voice or video call . . . The information gathered includes Skype audio regarding intimate conversations between couples and more.

Intimate conversations between couples who don't speak the same language and rely on Skype translation services to communicate? Color me skeptical. The reporting on this seems a bit overblown and drama-seeking to me.
Score: 9 Votes (Like | Disagree)

benshive
I'm always surprised that people are surprised by this. If recorded audio is being processed and used to improve a service like a translator, personal assistant, etc. of course there's a group of employees that can hear it.
Score: 5 Votes (Like | Disagree)

I7guy
Lately “transparency” is a moving definition. AI needs help from humans to get better...no surprise.
Score: 4 Votes (Like | Disagree)
Read All Comments