Apple Music today announced a new initiative called the "Apple Digital Masters" program, which aims to combine all of its "Mastered for iTunes" songs into one streaming catalog (via Billboard). 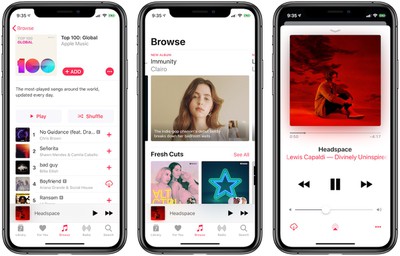 Apple began the Mastered for iTunes program in 2012, allowing engineers to optimize music for the digital download format by encoding from high-resolution masters. This placed the iTunes songs as close to possible as the original master recordings, and were designated specially as "Mastered for iTunes" in the store.

In ‌Apple Music‌, Apple doesn't designate whether a song is under its Digital Masters program or not. Still, for people who care about lossless audio, it's a good sign that the company has formally acknowledged a plan to move forward with adding more high-quality audio tracks to ‌Apple Music‌.

Numerous other streaming music services have lossless audio plans that are priced separately from the standard streaming tiers. Namely, Tidal offers a HiFi subscription for $19.99/month (compared to the base $9.99/month plan) that lets users stream lossless audio on demand.

dannyyankou
How about the studio masters in lossless bit rate? That would be nice.
Score: 27 Votes (Like | Disagree)

Im still hoping Apple will just buy Tidal and input all the good from them into Apple Music..but I’m glad to see them start someplace

There are many claims from people that they believe lossless sounds better but there has yet to be a study where people can prove it in a blind test. It is very easy to be fooled into thinking something sounds better, a placebo type of effect occurs and people do not realize it.

Apple pushing properly mastered music does a lot more for sound quality than simply pushing lossless will ever do.
Score: 18 Votes (Like | Disagree)

jonblatho
The article seems to muddy the waters on this, but Mastered for iTunes (and Apple Digital Masters, presumably) isn't lossless. People who "care about lossless audio," though I'm not one of them, are unlikely to be all that impressed by this. It's an improvement over standard Apple Music tracks, but the tracks are still certainly lossy.
Score: 16 Votes (Like | Disagree)

There are many claims from people that they believe lossless sounds better but there has yet to be a study where people can prove it in a blind test. It is very easy to be fooled into thinking something sounds better, a placebo type of effect occurs and people do not realize it.

Apple pushing properly mastered music does a lot more for sound quality than simply pushing lossless will ever do.

Even on very expensive gear into the $10k range it's nearly impossible to tell the difference between a well encoded 256kbps AAC track and a lossless track at any bitrate/resolution. Correct mastering matters FAR more than simply releasing lossless tracks will ever do.

If audio quality matters to you, invest in a better pair of headphones and/or speakers. A good separates amplifier even a very modestly priced one will do a better job than the one in your phone. If you're using speakers, good quality cable matters, it doesn't really matter what (digital) coax, hdmi or optical cable you use. You can build from there if you want. Only after you've exhausted all those details to the point you're flat broke and close to ruin should you even consider lossless audio as an option, and even then you're better off spending the money on whisky.
Score: 11 Votes (Like | Disagree)

jeffkoontz
If you want to get into the weeds of why mastered for itunes might be better than any old AAC file, Apple provides a pretty thorough breakdown on how their process limits clipping, aliasing, dithering, etc. here: https://images.apple.com/itunes/mastered-for-itunes/docs/mastered_for_itunes.pdf

Apple lossless through Apple Music (ala Tidal HD) would be nice, however, I do question how many people consider where their weak links are.. If you are listening to music via bluetooth through a car that doesnt event support AAC - you'd totally be wasting bandwidth. Even if you listen through proprietary Beats/Apple headphones/earpods via bluetooth you are still going to convert to AAC when the signal goes out to your phones. So, yes it would be great for everyone listening to Apple Music while wearing lightning connected headphones with a quality D/A converter, but what Apple is doing with Mastered for iTunes is probably really good for most real world use situations.
Score: 10 Votes (Like | Disagree)

JeffPerrin
Backstory on 'Mastered for iTunes':

Lossy formats are unforgiving with loud audio levels or peaking near the clipping point. "Mastered for iTunes" gives producers the tools and information to encode and monitor their audio so that it does not clip or distort when encoded to iTunes' lossy format. It's pretty much about making lossy-encoded music suck less. :p

This latest announcement, however, is likely just marketing speak since Apple is ditching the iTunes moniker for it's Music service...
Score: 8 Votes (Like | Disagree)
Read All Comments