Two of the iPhones set to be released in 2020 will feature 3D sensing rear camera setups with time-of-flight (ToF) camera lenses, according to Apple analyst Ming-Chi Kuo who shared the info in a note to investors that was obtained by MacRumors.

A time-of-flight camera system measures the time that it takes for a laser or LED to bounce off of objects in a room, providing an accurate 3D map of the surroundings. 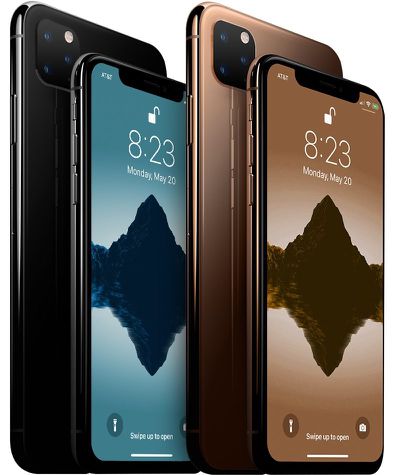 All three of the new iPhones are also expected to feature a front-facing camera system with Face ID, which deviates a bit from some rumors that have suggested an under-display fingerprint sensor could be coming to some 2020 iPhone models.

We've previously heard multiple rumors suggesting a time-of-flight camera system for the 2020 iPhones, including info from Kuo himself, but this is the first time that he's specified that he expects the 3D sensing camera system to be available in just two of the three upcoming 2020 iPhones.

Kuo goes on to say that a rear time-of-flight camera would bolster photo quality and offer new and improved AR applications. Apple and Huawei are believed to be the "most aggressive brand vendors" supporting 5G and ToF in 2020.

The current 3D sensing capabilities used in the front-facing TrueDepth camera system rely on infrared cameras and a dot projector to create a 3D image, but ToF systems use lasers technology, calculating the time it takes for a laser to bounce off of surrounding objects to create a 3D image of what's around you. ToF offers up more accurate depth perception, resulting in better placement of virtual objects, and it should offer up improved images thanks to the more advanced depth information.

Previous rumors from Bloomberg have suggested that the rear camera in Apple's 2020 iPhones, which will use use VCSEL (vertical-cavity surface-emitting laser) technology, will be able to scan objects up to 15 feet away, mapping out wide areas. ‌Face ID‌ currently works at about 25 to 50 centimeters away.

Kuo said in a prior investor's note that implementing ToF would require 5G connectivity because Apple would want to use the feature to create a "revolutionary AR experience." All 2020 iPhones are expected to feature 5G chips.

Rumors suggest Apple is planning to release three iPhones in 2020, but in new sizes. Apple is said to be working on 5.4 and 6.7-inch high-end iPhones with OLED displays, which would presumably be the devices to adopt the 3D-capable rear camera systems, and a lower-cost 6.1-inch model with an OLED display.

More information on what to expect in the 2020 iPhones can be found in the dedicated what's next section of our 2019 iPhone roundup.

yossi
I wish this would have explained what Time of Flight means
Score: 14 Votes (Like | Disagree)

I wish this would have explained what Time of Flight means

You shine a laser out of the phone and time how fast it bounces back. The camera can thus easily build up a 3-d understanding of how far everything is in front of it. Allows easy capture of 3-d models ,but also provides useful information about what to focus on and how to focus.
Score: 12 Votes (Like | Disagree)