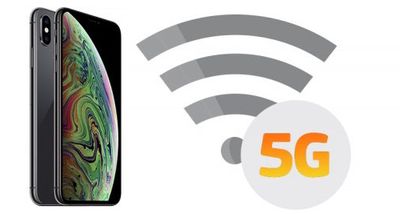 As quoted by CNBC, JP Morgan's Monday report says it expects Apple to release three top-of-the-line OLED 5G iPhones in 5.4-inch, 6.1-inch, and 6.7-inch sizes, two of which will feature advanced rear camera 3D sensing tech. In addition, analysts expect a fourth lower-cost model to be launched that's the same size as the iPhone 8 but without a 5G modem or OLED display.

"Our positive volume outlook for 2020 is driven by our current expectation for the launch of four iPhone models ... and more significant spec upgrades," Samik Chatterjee, an analyst at J.P. Morgan, wrote in the report.

"Our expectations include all three Sep-2020 iPhones (5.4"/6.1"/6.7" screen sizes) will adopt OLED displays and 5G baseband modems (with support for mmWave frequencies), and at least two of the three models adopting world facing 3D Sensing (Time of Flight) driving industry leading AR/VR capabilities which can be leveraged by custom built applications (including games)."

Apple's current iPhones have TrueDepth 3D-sensing cameras on the front, but the expectation is clearly that some of the 2020 iPhones will be equipped with similar cameras on the back. The report also says that Apple's lower-cost ‌iPhone‌ model will be aimed at "a much more 'value' category than it has been used to with its recent launches."

Some of the details in the report line up with previous predictions, notably from respected Apple analyst Ming-Chi Kuo. Kuo has said Apple plans to release three new iPhones in the second half of 2020, including high-end 5.4-inch and 6.7-inch models with OLED displays and a lower-end 6.1-inch model, which he believes will also have an OLED display.

According to Kuo, the 5.4 and 6.7-inch ‌iPhone‌ options will support 5G speeds, while the lower-end 6.1-inch ‌iPhone‌ in 2020 will continue to work with LTE.

Bloomberg reported in January that Apple isplanning to add a laser-powered time-of-flight 3D rear camera that will result in significant improvements to AR experiences to its 2020 iPhones.

The camera is said to be able to scan areas up to 15 feet from the device. Apple's front-facing TrueDepth camera uses 3D technology but because it's infrared and not laser-powered, it only works at distances of 25 to 50 centimeters.

JP Morgan's Chatterjee says he expects the fresh line-up will help Apple sell 195 million iPhones in 2020, up from an estimated 180 million in 2019. Later this year, Apple is expected to release three new iPhones with triple-lens rear cameras, but without 5G connectivity.

Haven't bought an iPhone in years and it looks like that'll continue to be the case.
Score: 15 Votes (Like | Disagree)

remember when tim said he can fit the entire Apple product line on one table?

Yeah, dining table in the grand hall at hogwarts!

"THE PRODUCT PIPELINE IS LONG AND WILL BLOW YOU AWAY" (c) (tm) Cook - in every earnings call/interview since 2012.
Score: 11 Votes (Like | Disagree)


or any other small phone, dammit!
Score: 11 Votes (Like | Disagree)

Caliber26
I really miss the days of a single iPhone that only came in white or black.
Score: 7 Votes (Like | Disagree)

I love my iPhone 8 Plus but definitely would have gone with the iPhone 8 if it had the dual lens portrait mode camera. I miss having a small phone that easily fits in my pocket and that I can use with one hand. I hope Apple doesn’t keep certain features from the smallest sized iPhone in 2020. I will definitely purchase it if it offers everything that the larger models do.

I agree, but the iPhone 6/7/8 doesn’t qualify unless one has enormous hands. I miss an iPhone which I can really use one-handed while holding it, not perching it on my fingers. i.e. where my thumb can reach the whole screen while my fingertips grasp the far edge. This means the iPhone SE, and I’m really wistful for the iPhone 4, the size of which we’ll never see again.
Score: 7 Votes (Like | Disagree)