Apple to Expand Seattle Presence With 2,000 New Hires Over Next 5 Years

Monday June 24, 2019 3:29 pm PDT by Juli Clover
Apple is planning to expand in Seattle with an additional 2,000 new hires over the course of the next five years, Seattle Mayor Jenny Durkan announced in a statement today. 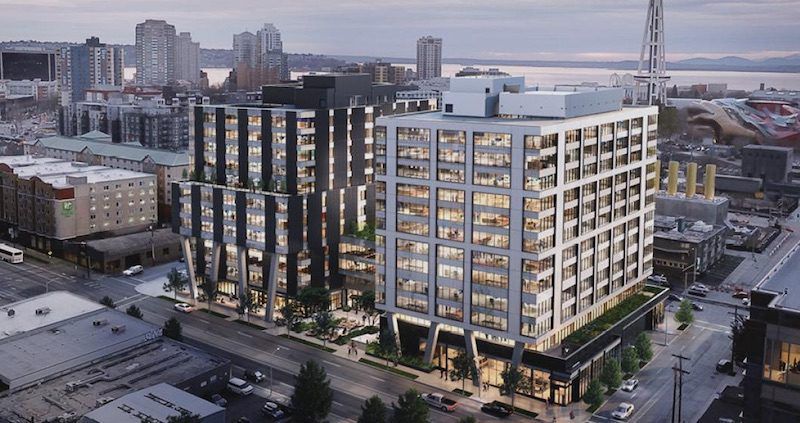 333 Dexter, where Apple is rumored to be expanding in Seattle

Apple has several offices in Seattle with teams working on iCloud, artificial intelligence, and Siri, and recent rumors suggested Apple was planning a major expansion, which has now been confirmed. From Durkan:

"These new jobs confirm what we already knew, we have the best talent and city anywhere. Apple's expanded footprint in Seattle is another example of the growing opportunity that exists for residents of Seattle and the economic powerhouse our City has become. Yet we know that as Seattle continues to grow, we must act urgently to address the pressures that follow - from tackling affordability to new affordable housing to increasing transit.

"By next year, an estimated 70% of jobs in Washington State will require some sort of post-secondary credential. It is my top priority that our kids growing up in Seattle today are prepared to fill the great engineering and computer science jobs that Apple announced today. That's why we created the Seattle Promise and the Opportunity Promise - so our youth are connected with resources and put on a path to the good paying jobs of Seattle's future."

Earlier this month, there were rumors that Apple was looking at leasing a large office complex in Seattle's South Lake Union neighborhood. Apple is said to be planning to occupy a two-tower building at 333 Dexter Avenue, which offers around 630,000 square feet of office space and could accommodate 4,200 employees.

Apple in late 2018 said that it would establish a new site in Seattle, which could be the large office building mentioned in rumors.

trusso
Not being flippant, but if 70% of your workforce requires post-secondary education, who's going to serve you food, ring up your groceries, or fix your plumbing?

Who can afford to?

Will.O.Bie
Any time a big company creates more jobs in the USA, it's great for the economy and the community it's in. Two thousand jobs may not be a lot, but that's two thousand families that will benefit from this announcement.

I'm pretty sure someone will find something negative to say about this because, well, it's ingrained in a lot of people to complain about everything.
Rating: 9 Votes

It’s called the free market. It always provides what is needed because what it doesn’t supply is not, definitionally, really needed.


True there are these problems but clustering very educated people is a smart move. Smart people want to socialize with smart people and this is where new ideas and startups come from. Not sure many barista's, cooks, are invited to social events or dinner parties by those in tech.


Clever words and imagined truths doth not a valid argument make. :rolleyes: When the rubber meets the road, you'll find out how things really work.

I'm an engineer by training myself, but I've come up the hard way. I know better than to denigrate those who serve me my food, haul 18-wheelers across country to stock my supermarket, and diligently construct my electronics half a world away. Just because they didn't catch the breaks the technical elite did doesn't mean they're any less intelligent or worthy of respect.

Moreover, there's a difference between education and wisdom. As Jimmy Stewart once said, "I wouldn't give you two cents for all your fancy rules if, behind them, they didn't have a little bit of plain, ordinary, everyday kindness - and a little lookin' out for the other fella, too."

libertysat
Anyone here ever driven around Seattle?

Not being flippant, but if 70% of your workforce requires post-secondary education, who's going to serve you food, ring up your groceries, or fix your plumbing?

Who can afford to?

This is how businesses going outside of U.S.


This is America in the 21st century, (and other highly developed 1st world nations). The kind of jobs that require less formal education (mining, manufacturing) have gone overseas where they are much much cheaper. They aren't coming back unless you can ban air travel and slow down sea based shipping. Affordable housing is absolutely an issue, but its not unique to Seattle by any means.


But you can't off-shore your local services like [USER=22275]@trusso[/USER] asked, and even if you outsource, the outsource company still needs to find people locally to provide the services.

This is a problem many big cities are facing - high wages of a large skilled/technical workforce push property prices up so only people earning those high wages can afford to live there, forcing out the nurses, waiters, workers, shop assistants, cleaners, security guards etc - the people you need to sustain a city.
Rating: 4 Votes

The real answer is it will be people commuting in from the lower-cost extended suburbs (Seattle and it's satellite major cities have a pretty solid mass transit system that is actively being expanded).


Pretty solid mass transit system?? You clearly don’t live in the Seattle area. As someone who works and commutes to Seattle every day, “solid” is not the word I would use to describe its transit system. It does start with “s” though.
Rating: 4 Votes

And Tim Cook was a Compaq "cast off".

Actually Compaq was a Tim Cook cast-off. He punched out of there after six months; it didn’t take very long to realize it was a crap show there. A year later, Compaq was imploding.

Many of our grocery stores now have self-checkout (and you are not-so-subtly encouraged to use it by not manning the traditional stations during non-peak hours) and then of course we have Amazon Go where self-checkout is the only option. So that is one area covered, I guess.

The real answer is it will be people commuting in from the lower-cost extended suburbs (Seattle and it's satellite major cities have a pretty solid mass transit system that is actively being expanded).


I've been to Seattle. They have extremely narrow lanes of traffic and slow buses that you have to stand around and wait for. It's congested, hilly, and rainy, and terrible overall for biking. It's seems like a terrible city for commuting. Yet there is this "great public transportation system?" What am I missing?
Rating: 3 Votes

Plumbers make good money, but probably not that good of money.


As someone who started out as an electrician, skilled trades can make you lots of money. Not so much in just working hourly, but if you own a business, become a contractor, yes. You're very easily in the bracket of your highly-paid executives.

It's not an easy life. You have to run a business with employees to get to that level, and all the headaches and hustle it requires.

The frustrating part is when you're trying to work a trade, just as a "job" because maybe you have other interests in life other than dedicating your life to running your own business, it still becomes difficult enough maintaining your own tools, usually a truck, other expenses, that it often crosses your mind that it would be easier stocking shelves or working in a warehouse somewhere. This squeeze is especially true in big cities, and why there is this perception that illegal immigrants are "only ones" who will do infrastructure work.
[doublepost=1561477685][/doublepost]

If I was Apple, i would come back to Detroit, they use to have a office there back in the early 90's. And with automobile automation would be a good place. Plus having all your technology along the west coast. Subject to earthquakes, tsunami's. forest fires and disasters. Spreading your tech across the whole united states might be a good idea.


I grew up in Michigan. Plenty of sand. I would love the idea of factories built there which turned raw sand into silicon.

Steve Jobs himself complained. He said the education system wasn't training people with the skills needed to do basic manufacturing. He said that was the number one problem he had trying to locate manufacturing in the USA. He talked about griping about this directly to Obama.

The problem with Detroit is that while it once had a manufacturing base, those jobs left and those skills left.
Rating: 3 Votes