Apple in iPadOS introduced some performance improvements between the iPad Pro and the Apple Pencil, cutting latency from 20ms to 9ms with the new software.

Third-party developers who make apps that use the ‌Apple Pencil‌ will also be able to take advantage of some of these latency improvements, Apple software development chief Craig Federighi confirmed last week. 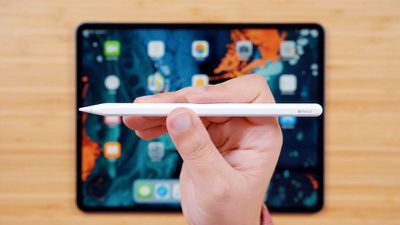 Federighi shared the information in a response to an email sent by Artstudio Pro developer Cladio Juliano, who tweeted what Federighi had to say last week. The info was highlighted today in a tweet by developer Steve Troughton-Smith.

In the email, Federighi explains that third-party developers have had access to predicted touches via UIKit since iOS 9, and with iOS 13, developers will receive the "latest and greatest" touch prediction advancements in minimizing PencilKit drawing latency.

Federighi explains just how Apple introduced the latency improvements, and he points out that there's a small gap of 4ms that developers won't have access to at the current time because Apple didn't have a way to safely expose the capability to developers. From Federighi's email:

With these you can achieve nearly all of the improvements you've seen in PencilKit drawing with your own renderer. (There does remain a small gap: 4 ms of our improvement comes from a technique called mid-frame event processing; we are looking for ways to expose this capability to third party engines in the future, but for this year this one was only safely achievable through tight integration within our frameworks).

thisisnotmyname
I would have expected that was automatically exposed from the OS. I'm a bit surprised that they had to explicitly make some of those capabilities available to third party developers.
Score: 12 Votes (Like | Disagree)

I would have expected that was automatically exposed from the OS. I'm a bit surprised that they had to explicitly make some of those capabilities available to third party developers.

It is, if you use the appropriate control. But developer’s may want to integrate it into their own canvas or controls. In which case it is harder to expose it since things you do in your own code can interfere with the ability of the pen code to get the cycles it needs from the GPU and CPU.
Score: 4 Votes (Like | Disagree)

How nice of Apple. You would think they would limit functionality improvements to their own apps.

I think you don’t know how development works. When you start creating code you can’t always abstract it in a way that’s usable by third party devs through an API. What Federighi meant is right now the code that allow for that part of delay reduction is split between different of Apple software technologies. To be made safely accessible to others devs it needs to be abstracted, made indipendent, because private frameworks can’t be exposed for security reasons. You build these frameworks after you have the working feature, it’s simply impossible to abstract a solution that doesn’t exist. And this sort of work can require a massive rewrite of some parts of the relevant underlying technologies, and it requires time.
Score: 4 Votes (Like | Disagree)

NickName99
I love that he gets into such detail. That’s interesting about the 4ms improvement they got using something they apparently can’t expose as a public method without some risk.

Now I’m curious about “mid-frame event processing”, but googling it hasn’t immediately got me anything.
Score: 4 Votes (Like | Disagree)

I love that he gets into such detail. That’s interesting about the 4ms improvement they got using something they apparently can’t expose as a public method without some risk.

Now I’m curious about “mid-frame event processing”, but googling it hasn’t immediately got me anything.

Now I’m not sure so take this with a grain of salt, but as an engineer I’m inclined to believe “mid-frame event processing” means they are updating some pixel information (likely just the pixels associated with the pencil) in between frame updates in which all pixel information is updated and displayed. In other words, in between hardware detections of the pencil location, software would update where it presicts the pencil to be on the next update, and it can start looking for the pencil there instead of looking arbitrarily, mean the location can (usually) be found quicker. What I’m not sure about is if these pixels are actually being updated mid-frame or if the processing is simply keeping this information stored until the next frame is ready to update. I can’t see how the pixels could be updated mid-frame unless they had an individual refresh rate, so I’m inclined to believe the second case. If it’s the second case, it would make sense why Apple doesn’t want to give developers access to this, as this could quickly lead to timing errors between the software and hardware interrupts, such that it would only work within Apple’s framework and not an arbitrary code framework.
Score: 3 Votes (Like | Disagree)
Read All Comments