Some Spotify Users Frustrated With Recent Update, Moving to Apple Music Instead

One week ago today Spotify launched a revamped "Your Library" tab that the company said was "designed to get you to the content you want faster." According to Spotify subscribers on r/Spotify, this update has done the complete opposite and made navigating large music libraries nearly impossible, with the main purpose apparently made to promote Spotify's burgeoning interest in podcasts. 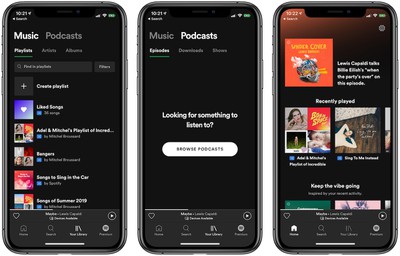 On r/Spotify this week, over a thousand users have gotten behind a post asking for the "old" Spotify to come back, with a few hundred comments discussing the various problems with the update. People have a lot of different thoughts on the update, but the consensus on what went wrong appears to be that Spotify stripped features in Your Library to make room for the new Podcasts tab.

In the process, the Songs tab was removed and the recently played section has been moved and downgraded, showing fewer artists and songs and removing some of its customization features. We've linked some of the Reddit users who provided specific complaints about the update below:

u/TehCrag: "Basically they removed the Songs tab and the Recently played section. And the albums tab only shows full albums that you have saved, so if you have 3 songs from the same album, they would be in the ‘liked songs’ playlist instead... which doesn’t have an alphabet scroll bar.

Also there’s a giant podcast tab next to music. They’re pushing them hard."

u/Skippin101: "There is no alphabetical "scroll bar" on the right side of the liked songs, artists, or albums pages. If I want to play a song that starts with "Z", I have to manually scroll all the way to the bottom instead of tapping the "Z" letter on the right side like before.

The recently played tab is a huge downgrade. It's now on the homepage, features far less artists/playlists, isn't customizable (i.e. you can't remove an artist or playlist from it or re-arrange it), can't be used in offline mode, and, worst of all by a country mile, when you click on a recently played artist it takes you to their artist page instead of showing you which songs you've saved by that artist."

Due to these changes, a thread recently began on r/AppleMusic welcoming Spotify users who are moving over to Apple's streaming service instead, which appears to be quite a lot. Some Spotify users pointed out that they moved from Apple Music to Spotify for features like the recently played section in Your Library, which let them quickly jump back into the albums they had just listened to.

Now that this and other features have been removed, talk of canceling Spotify and moving to ‌Apple Music‌ has increased. Even on Twitter, searches for "Spotify update" lead to numerous tweets about users frustrated with the UI changes and asking Spotify to revert the update.

There have been a handful of controversial app updates over the past few years, including platforms like Snapchat. That app's November 2017 update, which was aimed at getting users to more clearly see the distinction between friends and celebrities, was so disliked that Snapchat ended up reverting some of the changes. The company still lost millions of users in the process.

Spotify has yet to comment on the reaction to the new update.

now i see it
changing the interface (via software) is like suddenly walking up to your tried & trusted familiar stereo receiver to suddenly find all the buttons & knobs are now in weird & different places.
People just want to play their music, not hunt around & dig for "knobs & dials".
Score: 24 Votes (Like | Disagree)

ChrisMoBro
I’m an Apple Music user that’s recently switched to Spotify and it’s the best decision I’ve ever made. It’s shocking and sad to see Mac Rumors write an article like this that’s so heavily biased. Fancy writing an article exploring how many people are fed up with how lousy Apple Music is?
Score: 24 Votes (Like | Disagree)

I’m an Apple Music user that’s recently switched to Spotify and it’s the best decision I’ve ever made. It’s shocking and sad to see Mac Rumors write an article like this that’s so heavily biased. Fancy writing an article exploring how many people are fed up with how lousy Apple Music is?

It’s not biased. Thousands of people are voicing their opinion on the recent Spotify update. It’s a trending issue.
Just because you don’t like this news doesn’t invalidate what people are saying.
Score: 21 Votes (Like | Disagree)

bigboyz12000
I was at the gym when mine updated and i went to change the song and was like WTF is this??? Cancelled my subscription a day later..see ya!
Score: 18 Votes (Like | Disagree)

sundog925
People whine about anything.

I like the new changes, and as always, Spotify’s algorithms are far superior to Apple Music, and free Hulu and Showtime for students? Wtf does Apple give?
Spotify til’ I die!
Score: 17 Votes (Like | Disagree)

apolloa
Haha give it 3 weeks and they’ll all come back to Spotify once they realise how Apples music suggestion system isn’t as good as Spotify’s..
Score: 12 Votes (Like | Disagree)
Read All Comments

Saturday May 30, 2020 4:00 pm PDT by Eric Slivka
Apple today doubled the price for upgrading the RAM on the entry-level 13-inch MacBook Pro, with customers in the United States now being charged $200 to move from 8GB to 16GB compared to the previous $100 upgrade price. Similar increases are seen in other countries, such as moving from €125 to €250 in Germany and from £100 to £200 in the United Kingdom. Current pricing on RAM upgrade for ...
Read Full Article • 286 comments

Sunday May 31, 2020 8:04 pm PDT by MacRumors Staff
Amid unrest in numerous U.S. cities following last week's killing of George Floyd by police in Minneapolis, Apple CEO Tim Cook has shared an internal memo with employees (via Bloomberg) addressing the pain that many are feeling and urging others to commit "to creating a better, more just world for everyone." Cook also announced that Apple is making donations to several groups challenging...
Read Full Article • 104 comments

Monday June 1, 2020 7:50 am PDT by Joe Rossignol
If you are still hanging on to a Mid 2012 model of the 15-inch MacBook Pro with a Retina display, and require a new battery or other repairs, be sure to book an appointment with a service provider as soon as possible. In an internal memo today, obtained by MacRumors, Apple has indicated that this particular MacBook Pro model will be marked as "obsolete" worldwide on June 30, 2020, just over...
Read Full Article • 145 comments

Sunday May 31, 2020 7:26 pm PDT by Frank McShan
Apple is introducing a new internal USB-C Diagnostic Tool as a successor to its existing Serial Number Reader, which can be used to both collect a device's serial number directly from its logic board and test power on a device itself. Image via Giulio Zompetti With only a Lightning version previously available, images have surfaced of a new USB-C Diagnostic Tool (UDT) that appears to be known ...
Read Full Article • 11 comments