Google has no future plans to release additional tablet devices and has even canceled two models that were in development, the company confirmed to Computerworld today.

Google has not released a tablet in 2019, but did come out with the Pixel Slate in 2018. Google was working on two smaller tablets, but ultimately decided to stop focusing on the tablet form factor in favor of laptops. 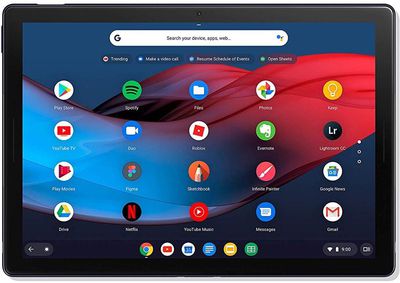 The Pixel Slate was Google's first Pixel-branded tablet offering, and as Computerworld clarifies, Google considers a tablet to be a device that detaches completely from a keyboard base or has no physical keyboard at all. Google considers its two-in-one convertible devices like the Pixelbook to be laptops, not tablets.

Google announced its plans to discontinue work on tablets to employees yesterday, and those working on tablet-related projects will be reassigned.

A Google spokesperson directly confirmed all of these details to me. The news was revealed at an internal company meeting on Wednesday, and Google is currently working to reassign employees who were focused on the abandoned projects onto other areas. Many of them, I'm told, have already shifted over to the laptop side of that same self-made hardware division.

It's not clear why Google has ultimately decided not to pursue the tablet form factor, but the company may be finding it difficult to compete with Apple and Samsung, the top two tablet vendors worldwide.

Apple's iPad is responsible for the most worldwide shipments, and over the course of the last few years, Apple has been aiming to hit all price points with the 6th-generation ‌iPad‌, iPad mini, iPad Air, and iPad Pro models.

Google plans to continue offering support and updates for the Pixel Slate until June 2024, and the Chrome OS team will continue to focus on tablets and laptops in its software development. Though Google is discontinuing its own tablets, there are other manufacturers who produce Chrome-based tablets.

Google will be shifting focus to laptops, with a laptop-oriented Pixelbook product planned before the end of the year, and will also continue focusing on its Pixel line of phones.

ThisBougieLife
The iPad is essentially the only tablet worth using (I’ve tried a few Android ones and was unimpressed). I find that odd. It seems like it should be a more competitive market, but it really isn’t at all. The iPad is practically its own market.

Apple has done well at making the iPad a computer alternative. The Android tablets could never get past the "giant phone" stage (which is how many viewed the iPad when it was first introduced. It's moved far beyond that).
Score: 41 Votes (Like | Disagree)

benshive
They got their hands on the latest iPad Pro and realized there was no way they could compete ;)
Score: 37 Votes (Like | Disagree)

thadoggfather
not that surprised, it was never really a different experience than a blown up version of android phones. and certainly not a gateway drug into the G platform.

Lots of android diehards swear by their iPads as their preferred tablet, even if it's begrudgingly.
Score: 24 Votes (Like | Disagree)

onespeedvelo
iPad is already on a class of its own. Now with the new OS will take off even more!
Score: 18 Votes (Like | Disagree)

It's not clear why Google has ultimately decided not to pursue the tablet form factor, but the company may be finding it difficult to compete with Apple and Samsung, the top two ('https://www.macrumors.com/2018/11/02/idc-q3-2018-ipad-iphone-shipments/') tablet vendors worldwide.