Apple continued to lead the tablet market in the third quarter of 2018, with the iPad achieving "nearly double the shipments of its nearest competitor," according to data shared by research firm IDC today. 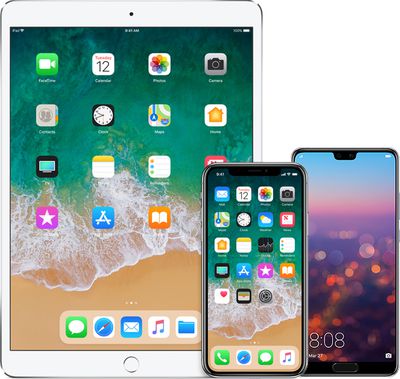 Apple on Thursday reported sales of 9.7 million iPads last quarter, giving it an estimated 26.6 percent share of the worldwide tablet market during the July-September period, according to IDC. Samsung finished runner-up with an estimated 5.3 million tablet shipments and 14.6 percent market share.

The worldwide tablet market declined 8.6 percent during the quarter, as global shipments fell to 36.4 million, according to IDC. Apple was not immune to the market contraction, as iPad revenue declined 15 percent last quarter on a year-over-year basis, according to the company's earnings report on Thursday.

The refreshed $329 iPad with Pencil support that launched in late March continued to drive volume although it was unable to maintain the same momentum from the third quarter of 2017 as that was the first time in a while that Apple had released a lower cost iPad. iPad Pro saw year-on-year declines in anticipation of a refresh at the beginning of the fourth quarter, which bodes well for Apple through the end of the year.

iPad has remained the world's most popular tablet for several years, even as the market has declined. IDC senior research analyst Jitesh Ubrani believes Apple's continued focus on innovation and marketing has helped the company set itself apart from smaller rivals such as Microsoft, Amazon, and Huawei.

Notably, Microsoft did not crack the list of the top five tablet vendors based on shipments last quarter, according to IDC's data. An all-new Surface Pro launched in October, but that was after the quarter ended.

Top Five Smartphone Vendors, Worldwide Shipments in Millions, via IDC
Apple is typically the world's second largest smartphone maker, behind Samsung, but Huawei bumped it down to third for the second consecutive quarter. Nevertheless, IDC believes Apple could jump to first place next quarter thanks to anticipated holiday sales of the iPhone XS, iPhone XS Max, and iPhone XR.

Like the tablet market, the worldwide smartphone market also declined to the tune of six percent last quarter, according to IDC.

LordVic
Like usual, the iPad is still the best overall tablet out there for two entirely different reasons.

1, they spend a good chunk of time / resources making it a great experience for tablet use cases.

2, Nobody else seems to give a crap about this market. Android tablets are quietly pushed out using older tech with no attention to them, no real marketing, and just... left on shelves as a side note.

3. The hybrid market has eaten into the rest of the tablet market as they have started to get quite remarkably good at being tablets as well as computers.


I'mhoping the new Pro styling makes its way to the normal Apple iPad soon. that i'm ready to buy.
Score: 11 Votes (Like | Disagree)

tzm41
Most people here in the US haven't tried out a Huawei phone because they don't have that choice, since the government doesn't like Huawei. Yet some Apple fanboys immediately jump to the conclusion that Huawei sells $100 crap phones. I guess they never checked what Huawei is selling right now. They need to get out of their bubbles, and maybe take a look at what other tech sites have to say about the latest Huawei flagships.
Score: 9 Votes (Like | Disagree)

And the ASP of the Huawei phone was?

Apple owns the smartphone and tablet markets from a profitablity perspective.

Why is ASP relevant to a consumer? Cheerleading for ASP is about the most vomit-inducing thing I've seen end users do in technology.

Huawei sold more smart phones. They might be crap - and I think they are - but they sold more. End of story. No need for anyone to get out their pram or encourage Apple to gouge us even more.
Score: 8 Votes (Like | Disagree)

And the ASP of the Huawei phone was?

Apple owns the smartphone and tablet markets from a profitablity perspective.

I suppose when you can't brag about quality or innovation, profits, which is the ability to butt f*ck the consumer becomes your only way.of somehow bragging Bout Apple. Yay, they bent me.over again and emptied my wallet...
Score: 6 Votes (Like | Disagree)

The iPad remains the most popular tablet in a market that is slowly dying.

Here is more info on the global tablet market: 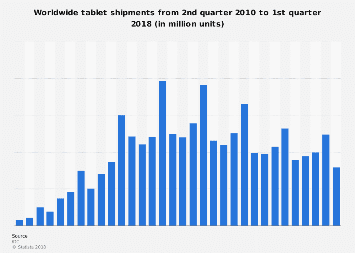 I wouldn't go by that to say it's dying. It's not like the mobile phone market. People keep their iPads longer than phone. It just growing like the Smart Phone market did.
Score: 5 Votes (Like | Disagree)

Financial information about Apple in general has no place in many conversations on this site.

It does serve a purpose when the “Tim cook is running Apple into the ground” narrative surfaces. (and quite frequently) it reminds those who believe the current management is incompentent how far Apple has become. Gross margins, asp, revenue, profits are all part of the conversation.

That's fair point, it's the "We don't care if Apple have lost their innovative edge, look aT the profits" brigade that make you want to vomit!! Huge profits usually come from selling something at a much higher price than it COSTS to make, so bragging about this as if its a good thing is the most bizarre thing ever... it's only slightly worse tho than folk who don't want Apple to lower their prices as "poor people" could then afford this luxury niche brand and it would.then somehow dilute the premium experience.. lol.
Score: 4 Votes (Like | Disagree)
Read All Comments