With the U.S.-China trade war seemingly showing no signs of slowing down, a new report claims that Apple is getting serious about diversifying its supply chain in an effort to reduce its reliance on Chinese manufacturing. 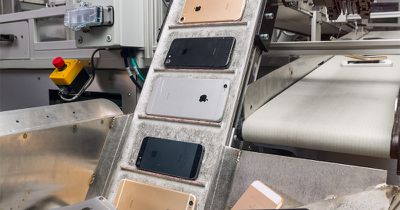 iPhone disassembly robot Daisy
Specifically, Apple has asked several of its major suppliers to evaluate the cost implications of shifting 15 to 30 percent of their production capacity from China to Southeast Asia countries as it prepares for a "fundamental restructuring of its supply chain," according to the Nikkei Asian Review.

Key iPhone assemblers Foxconn, Pegatron, Wistron, major MacBook maker Quanta Computer, iPad maker, Compal Electronics, and AirPods makers Inventec, Luxshare-ICT and Goertek all have been asked to evaluate options outside of China, multiple sources say. Many other Apple suppliers such as print circuit board and casing providers are closely monitoring where these major assemblers would shift their production.

The countries being considered for diversification include Mexico, India, Vietnam, Indonesia, and Malaysia, with India and Vietnam among the favorites for ‌iPhone‌ assembly, according to the report. Apple supplier Wistron already assembles a limited quantity of iPhones in India.

As part of the efforts, Apple reportedly has a so-called "capital expense studies team" tasked with negotiating with suppliers and governments.

While these plans are said to have been triggered by the trade war, the report claims that Apple has decided the risks of relying so heavily on manufacturing in China are "too great and even rising" even if the trade war is eventually resolved.

"A lower birthrate, higher labor costs and the risk of overly centralizing its production in one country. These adverse factors are not going anywhere," said one executive with knowledge of the situation. "With or without the final round of the $300 billion tariff, Apple is following the big trend [to diversify production]," giving itself more flexibility, the person added.

Apple currently relies on Chinese and Taiwanese companies for the vast majority of its manufacturing needs, so diversifying its supply chain would obviously take time. The report cites a source who believes it would take at least 18 months for production to begin in new locations.

jdclifford
Sorry Donald, no US jobs. Trade imbalance with China will be transferred to other Asian countries instead. BRILLIANT! FINANCIAL GENIUS!
Score: 46 Votes (Like | Disagree)

Sorry Donald, no US jobs. Trade imbalance with China will be transferred to other Asian countries instead.

I see you fail to realize how good it is that China's trade will be fragmented into multiple Asian countries. This type of jobs will probably never come to the US (at least to a sizeable degree), but as long as there is not a single industrial superpower (=China at the moment) the US has only to gain from weakening it.
Score: 24 Votes (Like | Disagree)

Hirakata
Good. Diversifying in many aspects of life is a good thing, and business is obviously one of them.
Score: 23 Votes (Like | Disagree)

Trump isn’t threatening China so Apple can move manufacturing to Vietnam or Mexico.

It's not about Trump, it should've been done years ago. China was allowed to grow and cheat to unprecedented levels.
Score: 17 Votes (Like | Disagree)

Agit21
This is good news. Apple wont be selling much devices anyway and don’t get me started on Chinas theft of IP.
Better move to other countries Tim.
Score: 12 Votes (Like | Disagree)
Read All Comments