As part of the deal allowing cable companies Comcast and Charter to sell iPhones for their respective mobile services, Apple has required them to also sell large numbers of other devices, reports CNBC. 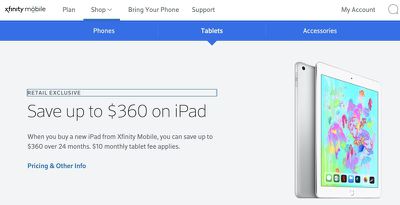 The two cable companies wanted to be able to offer the iPhone in an effort to better compete with the four major carriers in the United States -- Sprint, Verizon, AT&T, and T-Mobile -- and as part of the deal allowing Comcast and Charter to sell iPhones, Apple made them agree to sell other devices too.

The ‌iPhone‌'s popularity made it impossible for Xfinity Mobile and Spectrum Mobile to compete without offering it, according to CNBC's sources, which meant Apple had "ample leverage" in deal negotiations.

Subscribers are promised a $15 per month credit applied to their monthly statement for any ‌iPad‌ purchased.

Charter's deal is different and involves the Apple TV, which Charter offers as an alternative to a traditional cable box.

Charter sells Apple TVs at $7.50 per month for 24 months - or $180, the retail cost of an Apple TV. Alternatively, a customer can lease a Charter set-top box for $7.50 per month. In other words, Charter offers an Apple TV at the same price as a Charter set-top box, but a customer ends up owning the Apple TV and returning the Charter box. Charter has become the largest third-party seller of Apple TVs because of the agreement, two of the people said.

According to CNBC, there are benefits in these deals for Comcast and Charter beyond being able to offer the ‌iPhone‌. iPads and Apple Watches "enhance the value" of the Comcast wireless service, and the ‌Apple TV‌ offers a better navigation interface for Charter customers.

Many of Apple's carrier partners around the world also sell Apple devices other the ‌iPhone‌, much like Charter and Comcast.

nt5672
Things must be getting bad for Apple sales to force this.
Score: 20 Votes (Like | Disagree)

Things must be getting bad for Apple sales to force this.

Geez, can we stop with the always speculative doom and gloom nonsense?

This is normal business, just like pricing changes, promotions, etc. Welcome to Wallstreet where you consistently have to sell more stuff in the same period of time.

And guess what? Are Comcast and Charter American companies? Revenues in the Americas region hit all time records. Apple is NOT struggling in the US.

Almost all of their sales pressure has come from China. They still managed to put up $60B in PROFIT in 2018, or more than twice Google, as an example.

Apple is THE most profitable company in the world and doesn't need tips on sales execution. They are THE best at making money and this is just another way to do that.

JetTester
Love it! Apple dictating terms to the monopolistic cable companies. What goes around comes around!
Score: 7 Votes (Like | Disagree)

I suspect that Comcast and Verizon may have a pretty good case if they wanted to take Apple out for illegal tying.

And I suspect you are not a lawyer.
Apple does not have a monopoly or a near monopoly on the smart phone market in the US. It doesn’t even have a majority. Therefore tying is not illegal, just a normal part of business negotiations, two sides trying to get the best deal they can.
[doublepost=1560486004][/doublepost]

Nope, because they don’t even have a majority of smartphone sales in the IS, let alone a near monopoly. Nothing remotely anti-trust about this, standard business practice. See above.
[doublepost=1560486240][/doublepost]

This is exactly the business model. Another similar model is the one Qualcomm employed that caused Apple to file a complaint with the FTC.

No, the Qualcomm situation is completely different.
1. Qualcomm was demanding a cut of the entire device despite its patents not covering the majority of components
2. Qualcomm’s patents were standards based, i.e. they covered technology that all phones are REQUIRED to use and thus must be offered under specific pricing and use guidelines (FRAND) which Apple alleges that Qualcomm violated.

It had nothing to do with product tying.
Score: 5 Votes (Like | Disagree)

dwman
I hope Apple made Comcast offer zero sign-on as part of the agreement.
Score: 4 Votes (Like | Disagree)

Love it! Apple dictating terms to the monopolistic cable companies. What goes around comes around!

Comcast and Charter are tiny carriers who don’t have their own infrastructure hence their agreement with Verizon. They’re in no way “monopolies”.
The agreement is purely around the cellular service, not around the Internet or TV part… which I agree make Comcast and Charter monopolies but Apple is not dictating anything to them in that regard.
Score: 4 Votes (Like | Disagree)
Read All Comments