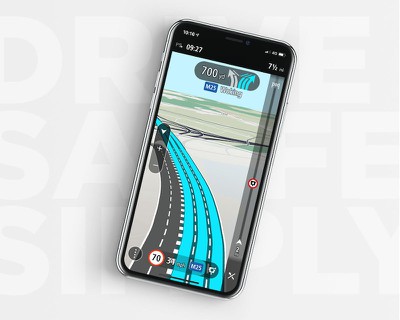 The offline maps are available on an à-la-carte basis, meaning that users can download maps only for the regions they need to save storage space. TomTom says the maps will automatically receive weekly updates to help users avoid newly blocked lanes, active road construction, and other traffic delays.

‌CarPlay‌ support enables users to access the TomTom app from their dashboard display in vehicles equipped with Apple's software platform, complete with new lane guidance functionality that helps users avoid missing turns and last-second merges by zooming in on their lane as they approach an intersection or exit.

Unfortunately, the iPhone app's route bar is not available on ‌CarPlay‌ at this time:

Hi Dirk, unfortunately, the ‌CarPlay‌® User Interface templates do not allow for the route bar in its current form. We are investigating ways to incorporate the information and features of the route bar in future versions of the app. Cheers, TomTom Team — TomTom (@TomTom) June 11, 2019

TomTom GO Navigation is available in the App Store and is expected to launch on Android later this year. The app offers a free trial, followed by one-, three-, and six-month subscriptions for $1.99, $4.99, and $8.99 respectively.

Wait.... TomTom is still around?

Considering they are a major provider for Map survey/GPS data for Apple Maps, I would say they’re still fairly relevant and ‘around’.
Score: 8 Votes (Like | Disagree)

Why pay when Waze is free?

Why pay when Waze is free?

why buy a phone when talk is free
Score: 6 Votes (Like | Disagree)

Considering they are a major provider for Map survey/GPS data for Apple Maps, I would say they’re still fairly relevant and ‘around’.

Beat me to it.

Waze is awful in the UK for traffic.

I’ve tried them all and have stuck with TomTom, don’t mind paying a small fee for accuracy.