Apple at WWDC 2019 last week unveiled its long-awaited redesigned Mac Pro along with a new Pro Display XDR. At the time, Apple said both products will be available to order in the fall, without providing a more specific timeframe. 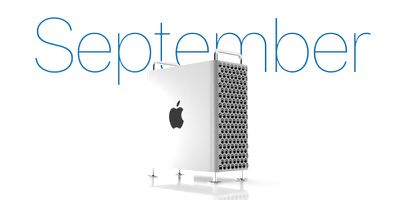 Apple has since updated its website following the end of WWDC, however, revealing that the new Mac Pro and Pro Display XDR are "coming in September." This date is listed on Apple's homepage in an overlay that pops open after clicking on "notify me" under each product, although only in the United States.

This date has yet to be listed outside of the United States, while the main Mac Pro page and other marketing materials still say "coming in the fall," so this may or may not be an error. We've reached out to Apple for comment.

Update: Apple's homepage now says the new ‌Mac Pro‌ and Pro Display XDR are "coming this fall." It's unclear if the "September" timeframe was simply a mistake or prematurely-revealed information. We've yet to hear back from Apple.

(Okay, okay, I know that this product is not for us and is for the real pros.)

For people who this Mac Pro is aimed to, the price they pay is quite affordable. No kidney drama!
Score: 32 Votes (Like | Disagree)

haruhiko
3 more months for us to sell our kidneys.

(Okay, okay, I know that this product is not for us and is for the real pros :p)
Score: 23 Votes (Like | Disagree)

Great news for tens of dozens of people who will actually buy these.

There are more Pros and companies with money than you think. Look for nice Mac growth when the numbers are reported.
Score: 23 Votes (Like | Disagree)

centauratlas
Much as I would like this, the price is just outrageous for a reasonably equipped machine. :)
Score: 19 Votes (Like | Disagree)

It's going to be a lot more than that. Remember who the Mac Pro is for: corporate purchasers and wealthy creatives. The former is primarily who it was designed for, and who can easily afford it.

First of all, professional equipment isn't cheap and those who buy it understand that. Go price an XDR comparable display and workstation. Apple actually is presenting tremendous value in this space. The $999 stand is the only questionable piece.

Secondly, money isn't the only determining factor for buying something, particularly when you have it. All cars are transportation, but BMWs, Benz, Ferrari, Porsche, etc deliver on metrics people care about.
Score: 19 Votes (Like | Disagree)
Read All Comments