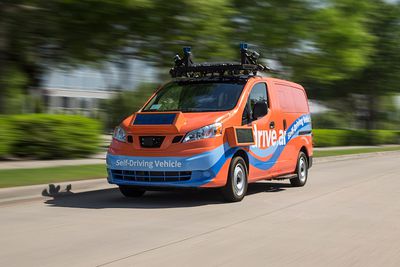 The planned deal is described as an "acqui-hire," suggesting that Apple is interested in the company primarily for its employees rather than its technology. The acquisition could reportedly result in dozens of Drive.ai engineers ending up at Apple, where they would likely work on autonomous driving systems.

"We don't comment on speculation," an Apple spokesperson told The Information, suggesting that the acquisition may not be finalized.

Drive.ai was founded in 2015 by a group of Stanford University students. Based in Mountain View, California, the company launched a self-driving shuttle service in select cities in Texas, but the report claims it has been "struggling" recently and looking for a buyer. It looks like that buyer may be Apple.

Self-driving vehicles will NEVER happen. Please stop this scam immediately. The technology will never be good enough without infrastructure changes, like rail-on-road.

Tesla vehicles in self-driving mode are as dangerous as motorcycles. Meanwhile, there are several car models that have NEVER had a driver fatality.

I use my Tesla model 3 autopilot every day, works fine for me on the highway, either with or without traffic. Love it!
Score: 11 Votes (Like | Disagree)

avanpelt
In light of the Pro Display stand announcement, it wouldn’t surprise me if they develop a car and charge an extra fee to get the “beautifully functional” steering wheel. :rolleyes:
Score: 10 Votes (Like | Disagree)

Self-flying planes will NEVER happen. Please stop this scam immediately. The technology will never be good enough without infrastructure changes, like rails in the sky.

Boeing airplanes in autopilot mode are as dangerous as zeppelins. Meanwhile, there are several airplane models that have NEVER had a pilot fatality.

I am a pilot with several certifications (VFR, IFR, multi-engine, complex aircraft) so I can say from experience that creating a so-called "self-flying plane" auto-pilot to fly an aircraft through a full flight plan from a beginning-of-the-runway takeoff to landing (full stop at the end of the runway but no taxi to a gate) is substantially easier than creating a self driving car to replace drivers in all conditions.

Sure someone will say, what about the 737-MAX problems, yes that was/is a huge debacle on Boeing's part, but the main point is that so many people are underestimating the extreme complexity of delivering a 100% self driving car to replace the driver in all conditions. It took about 80 years before commercial aviation started to become very safe, the evolution of self driving cards will take many decades to reach the kind of safety and consumer confidence we see in commercial aviation.
Score: 8 Votes (Like | Disagree)

Facts don't care about your feelings. Tesla's cars have had a much reduced fatality rate. When they are ultimately allowed to be on the roads without drivers, they won't be perfect, but they will save millions of lives as they will never drive drunk, be distracted, have medical problems, drive negligently or recklessly, or simply be incompetent.

There's no way you can claim that. There simply hasn't been enough data generated to form an opinion,.

Let's look at the numerous flaws with his statement.


* Sample Size: Anyone with even the most basic understanding of statistics knows the mistake Musk made. A single fatality is simply not enough data to make his claim. If there were 100 fatalities in 13 billion miles, then he would be justified in making his statement.

* Vehicle Age: The average age of motor vehicles in the US on the road is somewhere around 11-12 years. At the time Musk made his claim Teslas had only been on sale for 6 years, with the average age being even less than that. You can't compare the numbers of newer cars to that of older cars. Of course newer vehicles will have a lower fatality rate due to several factors, the most obvious being maintenance and state of repair.
* Safety Features: Musk likes to brag the Model S has a perfect 5 star safety rating (not quite true, but irrelevant for this discussion). The US fatality rate is for ALL vehicles from 5 star rated ones down to those with poor safety records. Vehicle safety (like airbags and crash worthiness) have a direct impact on fatalities, yet Musk is trying to attribute the safety of the Model S solely to Autopilot.

* Driving Conditions: Tesla Autopilot only works in good driving conditions. People don't use Autopilot in bad weather (rain/snow) or at night. The types of driving conditions where accidents are far more likely. So Musk is comparing the fatality rate of Teslas to that of vehicles that are driven in all types of situations where Teslas aren't driven.
* Vehicle Type: The Model S is a luxury class vehicle. The stats for road fatalities in the US he quoted are for all vehicles combined. If you separate out vehicles in the same class as a Model S (BMW 5 Series, Mercedes E Class and other mid-range luxury cars) you find the accident rate is actually 1 fatality in 320 million miles. Substantially better than Musks claim of 1 in 130 million miles for Tesla.


Bottom line, Musk should have never made his ridiculous claim in the first place, and we still don't have enough data to make an accurate prediction of the safety of Autopilot vs regular drivers (at least not until we can track miles driven in regular vehicles under the exact same limited conditions Autopilot works).
Score: 8 Votes (Like | Disagree)

mozumder
Self-driving vehicles will NEVER happen. Please stop this scam immediately. The technology will never be good enough without infrastructure changes, like rail-on-road.

Tesla vehicles in self-driving mode are as dangerous as motorcycles. Meanwhile, there are several car models that have NEVER had a driver fatality.
Score: 7 Votes (Like | Disagree)

Self-driving vehicles will NEVER happen. Please stop this scam immediately. The technology will never be good enough without infrastructure changes, like rail-on-road.

Tesla vehicles in self-driving mode are as dangerous as motorcycles. Meanwhile, there are several car models that have NEVER had a driver fatality.

Self-flying planes will NEVER happen. Please stop this scam immediately. The technology will never be good enough without infrastructure changes, like rails in the sky.

Boeing airplanes in autopilot mode are as dangerous as zeppelins. Meanwhile, there are several airplane models that have NEVER had a pilot fatality.
Score: 7 Votes (Like | Disagree)
Read All Comments