Twitter for Mac App Set to Return to macOS

Twitter has announced that its official Mac app is returning to macOS, almost a year after the company discontinued the native app, to the consternation of many users. 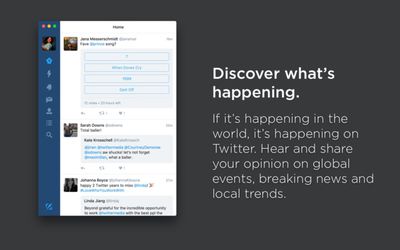 Twitter discontinued its native Mac app in February 2018
Twitter faced a backlash in February of last year when it announced that it would stop supporting the Twitter for Mac app in order to focus its attention on a "great Twitter experience that's consistent across all platforms."

At the time, the company advised users looking for a "full Twitter experience on Mac" to visit Twitter on the web. However, yesterday it revealed that a fully native app is coming back to Mac, thanks to Apple's Project Catalyst that lets developers easily port apps from iOS to the upcoming version of macOS Catalina.

According to a tweet from Twitter's Support account, the returning Mac app will be like the iPad Twitter app but "fully native," with all of the system features that users would expect of a Mac app, including multiple windows, window resizing, drag and drop, dark mode, keyboard shortcuts, notifications, and more.

Twitter is thrilled to announce we are bringing the Twitter for iPad experience to the Mac! The all new Twitter for Mac will be in development this summer in preparation for an early launch on macOS 10.15 Catalina. pic.twitter.com/Q13OUMRgjt — Twitter Support (@TwitterSupport) June 3, 2019

"Apple's exciting new technology empowers Twitter to easily bring our entire 1.5 million line code base from iOS to the Mac, allowing ongoing full feature parity with our iPad app, and enhanced with the macOS experience that will make Twitter feel right at home on your Mac."

The all-new Twitter for Mac is being developed over the summer and is scheduled for an early launch on macOS Catalina 10.15, which will be released in the fall.

jsmith189
I don't get why they didn't just leave the old one running until this came out. It's not like they ever updated it anyway, so we weren't expecting much. Instead, they made everyone go and buy a third-party app. Useless.
Score: 2 Votes (Like | Disagree)

dumastudetto
I'm sure users are excited as Twitter at the thought of them bringing their utterly awful iPad app to the Mac.
[doublepost=1559682802][/doublepost]

I don't get why they didn't just leave the old one running until this came out. It's not like they ever updated it anyway, so we weren't expecting much. Instead, they made everyone go and buy a third-party app. Useless.

They did you a favor because the third-party apps are way better than anything Twitter offers or will ever offer.
Score: 2 Votes (Like | Disagree)

orbital~debris
The weird thing about Project Catalyst-related announcements like this one from Twitter is they make the Mac seem as if it is the upstart platform, inheriting long-running apps from a heritage OS (iOS).
Score: 1 Votes (Like | Disagree)

Agreed. Although I don't use Twitter as frequently on my MacBook compared to my iOS devices, Tweetbot is a superior app and experience on both iOS and macOS.
Score: 1 Votes (Like | Disagree)

Agree. Every once in a while I load up the native Twitter app and it doesn't take long to being to wonder how people live with that thing every day.
Score: 1 Votes (Like | Disagree)
Read All Comments