Apple announced iPadOS and Sign In with Apple at yesterday's WWDC keynote, and today Apple executives provided CNET with some additional insight on the thinking behind its new iPad-dedicated OS and secure sign-in system.

With Sign In with Apple, users can log in to third-party apps and services using their Apple ID, providing a more convenient way of logging in using Face ID without revealing additional personal information.

Unlike similar third-party sign-in services offered by the likes of Google and Facebook, logging in with ‌Apple ID‌ lets users choose to reveal or hide their email address. Users can also get Sign In with Apple to generate a unique random, anonymous email address that can be managed for specific apps, giving users more control of their data.

Guy "Bud" Tribble, Apple's vice president of software technology, told CNET that the feature was a direct challenge to the idea you need to "pay a heavy price" for the convenience of a sign-on service.

"It's not rocket science to say, 'Hey wouldn't that be great to have that without the tracking part of it.' Our whole point of view is giving more control to the user over things like their data."

Sign In with Apple is coming in the fall as part of macOS Catalina, iOS 13, and iPadOS, the latter of which is designed to take advantage of the larger screens in the iPad family, featuring a redesigned Home screen, an updated Split View, overhauled Apple Pencil integration, and more.

Speaking about the decision to break out the ‌iPad‌ from its traditional iOS branding, Senior VP of software engineering Craig Federighi explained that it was a reflection of the device's increasingly unique capabilities.

iPadOS can be downloaded now by Apple Developer Program members, while the public beta will launch later this month. In the fall, iPadOS will be available as a free software update for the iPad Air 2 and later, all iPad Pro devices, the fifth-generation ‌iPad‌ and later, and the iPad mini 4 and later.

nate13
There should be absolutely no "blowback" from developers. If you're already using token based authentication, adding another service provider is extremely simple. Unless of course there are things you're getting from Facebook that you will no longer get from Apple, but that goes without saying.
Score: 13 Votes (Like | Disagree)

chelsel
Sign In with Apple is going to be huge! Some people questioned how and why developers would implement it. But, Apple is making it a requirement to implement Sign in With Apple if an app is using Facebook, Google or any other 3rd party sign-in provider.
Score: 9 Votes (Like | Disagree)

dannyyankou
I file this feature under the category “people don’t know what they want until you show it to them”. Seriously, no one thought of this or asked for it. But I’ll be using it for every website I have the chance.
Score: 5 Votes (Like | Disagree)

ipedro
The holy grail of the internet user experience is to eliminate the password. It's been a long time coming through Touch ID, then Face ID but Sign In With Apple is going to begin a flood in that direction. 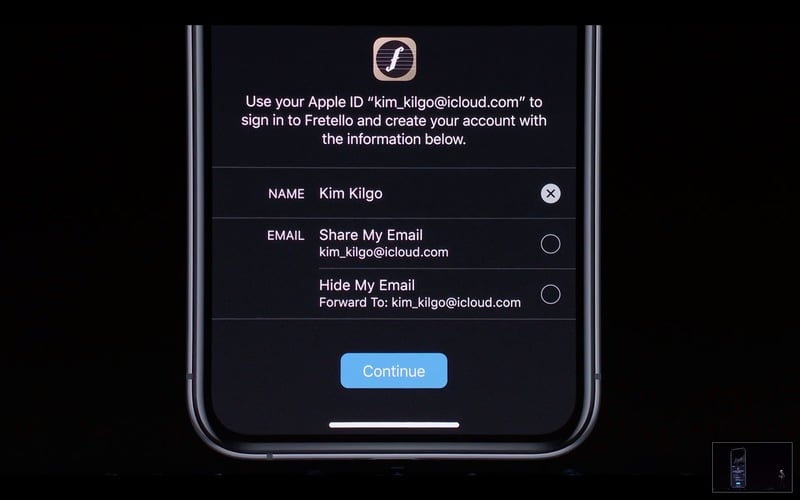 Whenever you go to a site that is signed up with Apple ID, there will be no friction, no login page at all. If it's you as verified by Face ID, then you're on the website as yourself. Completely seamless.

Apple usually leads the way to standards adoption. No doubt that Google will do the same with Android. Passwords will be largely dead within a few years.
Score: 5 Votes (Like | Disagree)

Except that the developer could easily prevent users from signing up unless they have a gmail, yahoo, etc. (all serverside by the developer who could then give an error notice like “that email is not supported, please use a different email”) OR if Apple ends it in @apple.com for example then it would be extremely easy for the developer to prevent

If you will ban Apple users why bother even making iOS apps then? No one in their right mind would do this. They want the Apple user base, and now with all this security and convenience, a lot of people will delete their old accounts and throwaway gmail ones.
[doublepost=1559684309][/doublepost]

Isn‘t the key skill of any tracking service to match your anonymous actions to your real email/identity that you used in some other context by matching IP, time, special cookies or fingerprints?

If Apple is giving you one address per app and this address is easily recognized as an obfuscated one by its Apple relay domain name part, these will quickly mapped to your real id. Without a VPN or TOR-like IP masking I would not think that this attractive sounding feature will have much effect. Maybe with sites that aren‘t part of one of the syndicates, but these are not the ones where you‘d need the feature in the first place.

So, while I want to believe...

True, the game is matching anonymous accounts with real identities, but the game is getting much harder now. Apple has taken multiple measures already in Safari to make all browsers look the same and to minimize fingerprints. Apple Pay hides my payment information. If you use private browsing the cookies will be deleted every session. There won’t be much left but a bunch IP addresses that my random account has used at a bunch of different locations with different IP addresses.
Score: 1 Votes (Like | Disagree)
Read All Comments