WWDC 2019 officially kicks off tomorrow, but as usual, the check-in process began today. Developers have started to pick up their badges and WWDC swag, which this year includes a reversible jacket, an assortment of Apple-themed magnetic pins, a special t-shirt for scholarship winners, and more.

Here's a photo of the check-in area via WWDC 2019 scholar Zach Knox: 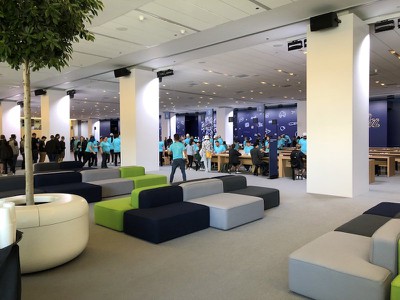 Here's a photo of the swag courtesy of WWDC 2019 scholar Erik Martin:

It turns out the jackets are reversible and come in a variety of colors like red, orange, and cyan via Ethan Saadia and Paul Hudson:

Here's another photo courtesy of Martin:

Apple is expected to unveil iOS 13, macOS 10.15, watchOS 6, and tvOS 13 at its WWDC keynote tomorrow, and it could have some surprise announcements in store, potentially including a preview of its long-awaited Mac Pro redesign.

MacRumors will have live coverage of the WWDC keynote on our website and on Twitter starting Monday at 10 a.m. Pacific Time. Apple will also be providing a live stream of the keynote on its website.

Canyonero
Are you serious? A Tim Cook Memoji pin? He really thinks he’s a rockstar.
Score: 19 Votes (Like | Disagree)

That’s not Tim Cook. It’s a customized pin for the attendee.


You’re one of those people who are so ready to criticize Tim Cook for anything that everything you see is skewed to be an attack on Cook.

Dude, your confirmation bias is showing and you’ve been outed.

Glad someone pointed it out lol.
Score: 6 Votes (Like | Disagree)

Are you serious? A Tim Cook Memoji pin? He really thinks he’s a rockstar.

That’s not Tim Cook. It’s a customized pin for the attendee.


You’re one of those people who are so ready to criticize Tim Cook for anything that everything you see is skewed to be an attack on Cook.

Dude, your confirmation bias is showing and you’ve been outed.

dogslobber
Where can I get one of those jackets?
Score: 3 Votes (Like | Disagree)
Read All Comments