Apple is widely expected to unveil the next major version of macOS at its annual Worldwide Developers Conference next week, and rumors suggest that the update will introduce standalone apps for Music and Podcasts. Apple also confirmed that its TV app will be expanding to the Mac in the fall.

Now, we have our first glimpse at what the Music and TV apps should look like courtesy of 9to5Mac's Guilherme Rambo, who has leaked screenshots of each app. Rambo says the screenshots are legitimate, rather than mockups or concepts, although parts have been redacted to protect his sources.

The report claims the new Music app is based on iTunes, as evident by the similar design language. Apple Music sections including For You, Browse, and Radio are listed in the sidebar with playback controls up top. 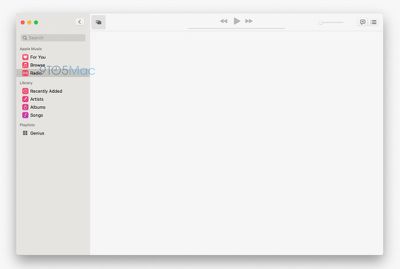 Music app via 9to5Mac
The new TV app is shown with a toolbar for switching between Watch Now, Movies, TV Shows, Kids, and Library sections. The sidebar contains the Library subsections of Recently Added, Movies, TV Shows, and Downloaded along with genres such as Action and Adventure, Comedy, Drama, and Kids.

TV app via 9to5Mac
The screenshots are not particularly revealing since some information has been redacted, but they provide a good glimpse of the overall look and feel of Music and TV on Mac. No screenshots of the rumored Podcasts app were shared.

Apple should unveil macOS 10.15 at its WWDC 2019 keynote on Monday at 10:00 a.m. Pacific Time. Recent trademark activity uncovered by MacRumors suggests that macOS 10.15 could be named macOS Mammoth, with other potential options including macOS Monterey, macOS Rincon, and macOS Skyline.

darkpaw
Literally cannot wait to see how it f***s up my carefully-curated library.
Score: 30 Votes (Like | Disagree)

Enclavean
Good riddance to the bloated mess that is iTunes
Score: 21 Votes (Like | Disagree)

itsmilo
So basic yet they somehow still managed to make it inconsistent between those two
Score: 19 Votes (Like | Disagree)

"Music on macOS 10.15 retains the ability to sync a user’s devices such as iPhones and iPods. Devices show up in the sidebar just like they do on iTunes." Please restore your PC replacement called iPad Pro using THE MUSIC APP.

I think they should bring back iSync.
Score: 18 Votes (Like | Disagree)

DocMultimedia
That's how my iTunes always looks when my network is sluggish. :)
Score: 16 Votes (Like | Disagree)
Read All Comments