Hong Kong-based designer Philip Lee has turned several of Apple's Macs into figurines, and recently, he introduced his latest product, a Mac-inspired plush. 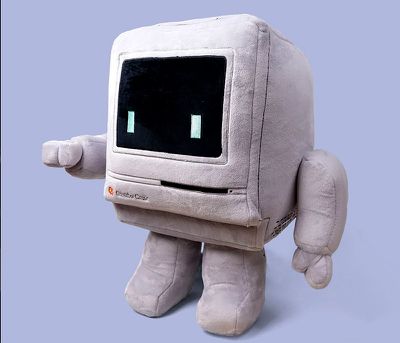 The Classicbot Classic Giant Plush is modeled after Lee's Classicbot toy figurine, which is, in turn, designed to look like an anthropomorphic version of the Macintosh Classic.

Priced at $72, the Classicbot Giant Plush is rather expensive, but like Lee's smaller figurines, it's been designed with quite a lot of detail. There's a disk insert at the front along with a Classicbot logo in place of an Apple logo, and at the back, embroidered details represent the fan, ports, plus, and more.

Unlike the Classicbot, the Classicbot Giant Plush doesn't have removable arms and legs, but they are articulated and can be posed and moved. The Classicbot measures in at 48cm tall, which is about 19 inches.

mr.steevo
I have two stuffed toys for my kids that are a large version of the mononucleosis virus and herpes virus.

More helpful than a Mac with limbs.
Score: 3 Votes (Like | Disagree)

Dustin Lenzz
Classicbots - you (don’t) gotta catch them all...
Score: 2 Votes (Like | Disagree)

Honestly that’s really cute, but if you think I’m paying $72 for that you’re nuts

Looks like pong on the screen. They should have shown breakout as a nod to Woz.

Breakout wouldn’t be a very good face though.
Score: 1 Votes (Like | Disagree)

JosephAW
Looks like pong on the screen. They should have shown breakout as a nod to Woz.
Score: 1 Votes (Like | Disagree)
Read All Comments