Apple today announced that its Apple Maps vehicles are now surveying Canada for the first time over the summer months. 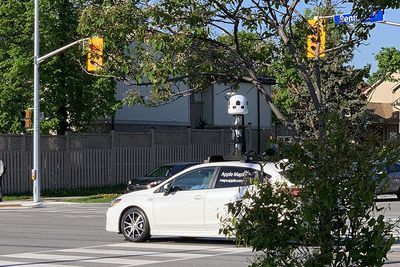 ‌Apple Maps‌ vehicle on Renforth Drive in Toronto via Reddit user whatifyoutry
The vehicles will drive across all 10 provinces between May and November, including British Columbia, Alberta, Saskatchewan, Manitoba, Ontario, Québec, New Brunswick, Nova Scotia, Newfoundland and Labrador, and Prince Edward Island. The vehicles have already been spotted in the Toronto area.

Absent from Apple's list are the northern territories of Yukon, Northwest Territories, and Nunavut, which are sparsely populated.

The data collected, including the likes of road details, signage, and landmarks, will be used to improve ‌Apple Maps‌ as part of Apple's efforts to rebuild the service, which began in the United States.

Beginning in May, Apple Maps will be driving across Canada throughout the summer. We'll be capturing road details, signage and landmarks — all to make the most accurate and useful Maps experience possible. The information collected will be worked on by our teams in Cupertino, California. We plan to publish this data in a future product update.

We always have your privacy in mind, so we're working closely with local regulators to ensure we follow all laws and regulations. All of our vehicles are marked Apple Maps, so you'll always know it's us.

Privacy is a fundamental Apple principle, so we're proud to build it into everything we do.

Beyond improvements to ‌Apple Maps‌, it has long been speculated that the data collected could benefit Apple's development of self-driving technologies or pave the way for Apple to launch its own Street View, but there is no concrete evidence at this point to suggest that either of those possibilities are true.

WTH! I just pulled up Apple [S]Craps[/S] (err, I mean Maps) on my MBP that is hardwired with an ethernet connection. I clicked on the Show You Current Locate button and got the following message box stating I needed to turn on WiFi. Seriously! Does Apple not know that ethernet can also give me an internet connection? Are their developers really that stupid these days? Apparently so! and yes the ethernet connection was providing 200 Mbits solid connection at the time... :confused:

Before you get carried away calling too many developers stupid, it's how the geolocation on our various devices is designed to work. Here's an article that might help you:

So it's not just about having an internet connection...
Score: 14 Votes (Like | Disagree)

JimmyBanks6
I still don't understand why there isn't a web based Apple Maps.

They would be able to acquire so much more data if Apple Maps results were available on a browser, instead, you have to use an iOS device, which to me is a draconian requirement.
Score: 9 Votes (Like | Disagree)

They may have set up the best foundation for autonomous driving yet.

Maps app itself is getting pretty great. In my situation, just adding speed traps and such would make me switch fully from Waze. I don’t even use google maps anymore.
Score: 7 Votes (Like | Disagree)

They may have set up the best foundation for autonomous driving yet.

Maps app itself is getting pretty great. In my situation, just adding speed traps and such would make me switch fully from Waze. I don’t even use google maps anymore.

I already use Apple Maps exclusively. The CarPlay, Siri and Watch integration without good enough directions are all I need.

Nice to see people up north getting the same treatment. They've come along way since 2012; they really should've announced the product in beta.
Score: 5 Votes (Like | Disagree)

Why is it ‘better’? I used to think this too....like three-ish years ago. Apple Maps has matured nicely over the years more hot to date roadways/Closures/Siri is more pronounced, actually to the point, where I deleted Google Maps, And Apple Maps is the only source I need.

- Does Apple Maps have street view? Isn't appearing on my phone right now.
- Google Maps 3D is significantly better than Apple Maps. Apple Maps only focuses on major cities, while Google seems to have used satellites to hit everywhere in the world. I live in a small town and all buildings are 3D.
- No offline maps - [edit] apparently this is wrong, which is good to know.
Score: 5 Votes (Like | Disagree)
Read All Comments