Microsoft has kicked off its annual Build developer conference in Seattle with a preview of its upcoming Edge web browser for Mac. 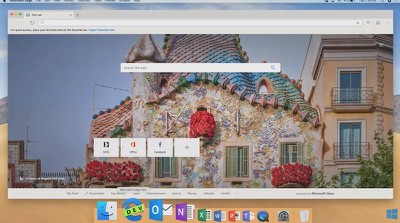 In a blog post detailing new features coming to Edge, which is being rebuilt with the same open source Chromium rendering engine as used by Google Chrome, Microsoft provided a sneak peek at how the browser will look on macOS. While only a brief glimpse, the browser looks somewhat similar to Chrome.


Microsoft shipped its first preview builds of its revamped Edge browser for Windows last month, but the browser remains listed as "coming soon" for macOS. The Verge believes the Mac version will be available "very soon," likely including both the Canary and Dev channel builds as on Windows.

Edge succeeded Internet Explorer as the default web browser on Windows in 2015 and is also available for iOS and Android.

yesjam
Some may dismiss this as "only" a Chromium browser, but I think it could be popular amongst those who would rather trust their data to Microsoft than to Google.
Score: 36 Votes (Like | Disagree)

ersan191
Something literally nobody asked for or wanted, thanks for spending the time MS
Score: 12 Votes (Like | Disagree)

yesjam
Semi-tangential observation: I think it's somewhat sloppy that the dock in the macOS screenshot above includes Microsoft Office apps that do not have the most up-to-date icons. You would think that a video coming from Microsoft itself would highlight the newest versions of its own flagship products.

That screenshot serves as a great "nutshell" reminder of some of the fundamental differences between Apple and Microsoft.
Score: 12 Votes (Like | Disagree)

derekamoss
Running Chromium Edge on Windows right now and if they put half an effort into it, you might want to check it out. They are gutting some stuff from Chrome and making a browser that is much more efficient and lighter weight than Googles.
Score: 9 Votes (Like | Disagree)
Read All Comments

Monday May 10, 2021 10:41 am PDT by Juli Clover
Apple's upcoming iPhone 13 models will be slightly thicker than the iPhone 12 models and will also feature larger, thicker camera bumps with lenses that protrude less, according to iPhone 13 schematics seen by MacRumors. The new iPhone 13 and 13 Pro models are expected to feature a thickness of 7.57mm, up from 7.4mm in the iPhone 12 models. That's an increase of 0.17mm, which won't be hugely ...
Read Full Article • 132 comments

Monday May 10, 2021 8:51 am PDT by Hartley Charlton
Independent technicians have reportedly been able to use leaked MacBook schematics to aid repairs (via Vice). Last month, Apple supplier Quanta Computer was hit with an attack by the ransomware group known as "REvil," leading to a large quantity of internal Apple documents about both released and unreleased devices being exposed. The leaked PDFs, available on a number of forums and online...
Read Full Article • 87 comments