Google may have only just announced its Pixel 3a and 3a XL smartphones, but rumors about this year's forthcoming Pixel 4 are already appearing, and the latest alleged leak suggests the search giant's redesigned handset will lack physical buttons. 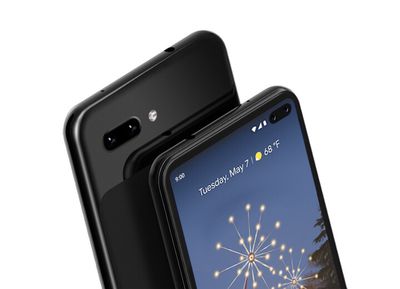 MacRumors render of Pixel 4 based on leaks
This information has been shared by Jon Prosser's Front Page Tech YouTube channel, which last year was the source of several accurate details about the Pixel 3 and Pixel 3 XL over a month before they launched, and also confirmed the Pixel 3a devices' existence before they were formally announced.

According to Prosser's source, the Pixel 4 will use capacitive touch areas on the sides of the aluminum handset in lieu of clickable physical power and volume buttons. Prosser suggests these touch-sensitive areas may use an extended version of Google's existing Active Edge technology currently found in the Pixel 2 and Pixel 3 that lets users squeeze their phone to launch Google Assistant or silence incoming calls and notifications.

In addition, Prosser's source corroborates other recent rumors, including the presence of punch-hole front cameras embedded in the display – akin to those seen in Samsung's Galaxy 10 Plus and other smartphones this year – and either an optical or ultrasonic in-display fingerprint sensor.

The rear of the device is expected to feature a new dual-lens camera setup including either a telephoto zoom or super-wide-angle sensor, and they may be aligned horizontally in the upper left corner of the handset rather than the more typical vertical orientation seen on other dual-lens smartphones.

The Pixel 4 and Pixel 4 XL are expected to be 4G LTE devices and will likely be announced during the second week of October – or just a few weeks after Apple is expected to launch its flagship successors to the iPhone XS, ‌iPhone‌ XS Max, and ‌iPhone‌ XR.

Google seriously should give up on hardware. It's a failure.

They should stick to ads.

Honestly, I like the style of the Pixel. I don't think I am alone.
Score: 68 Votes (Like | Disagree)

Google seriously should give up on hardware. It's a failure.

They should stick to ads.

A total failure, apart from creating probably the best phone under $500 and easily one of the best cameras in a smartphone.
Score: 49 Votes (Like | Disagree)

Based on the research, you're one of the few. The Pixel hasn't done well and the business is a rounding error for Google. Their hardware sucks.

Any competition for Apple not to become stagnant is good in my book.
Score: 30 Votes (Like | Disagree)

msama
I need at least one button for a hard reset on my phone! Either that or a pedometer that will hard reset it if I throw it on the floor hard enough
Score: 30 Votes (Like | Disagree)

Well, their phone cameras (hardware + software) are apparently among the best.

But a smartphone needs at least one button. Software gets buggy, and I won’t buy any device without at least one button for resets, etc. If every possible function can only be done with gestures, I have a gesture for it.
Score: 25 Votes (Like | Disagree)
Read All Comments

Apple-1 Computer Hand-Numbered by Steve Jobs Expected to Fetch Over $375,000 at Auction