The Samsung Galaxy S10 and the new OnePlus 7 Pro are both flagship smartphones that are designed to compete with the iPhone XS Max, and to see how their LTE chips compare, PCMag teamed up with Cellular Insights to test the signal strength of the new devices.

Apple's ‌iPhone‌ XS Max is equipped with an XMM7560 modem chip from Intel, while the Galaxy S10 and the OnePlus 7 Pro are using Qualcomm's X24 modem, which theoretically offers better performance. 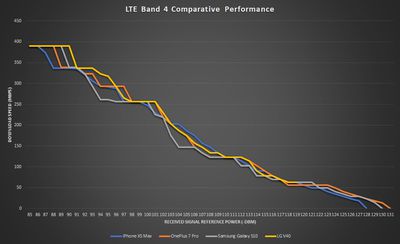 In testing on LTE band 4 with good signal, there wasn't a lot of difference in performance between the ‌iPhone‌ XS Max, the newer smartphones from Samsung and OnePlus, and the LG V40, which PCMag added in because it was 2018's best performing phone in terms of cellular speed.

All of the smartphones performed similarly, but the Samsung Galaxy S10 did see some of the slowest speeds, and at peak signal, the ‌iPhone‌ XS came in behind the OnePlus 7 Pro and the LG V40.

In a test with poorer LTE signal, the ‌iPhone‌ XS Max saw the slowest speeds and was outperformed by all of the Qualcomm chips. The ‌iPhone‌ XS Max was quite a bit slower than the Galaxy S10 and the OnePlus 7 Pro specifically.

Starting in 2020, Apple is no longer going to use Intel chips and is instead going to transition to Qualcomm's 5G chips. Intel has decided that it's exiting the 5G smartphone modem chip business leaving Apple no choice but to rely on Qualcomm technology and perhaps some chips from Samsung.

Apple and Qualcomm recently settled a vicious legal battle which had seen Apple refusing to use Qualcomm chips. Because of the dispute, Apple used Intel chips in the 2018 iPhones, and is expected to continue to use Intel chips for the 2019 iPhones.

Though the legal battle is over, Apple isn't likely to have time to swap over to Qualcomm modem chips for the 2019 iPhones, and Intel has confirmed that it's going to continue to supply 4G chips to meet its current obligations.

Thats not so bad, so wondering why it feels so bad in realworld, iphone reception is really bad in low signal area

The test is cherry picking band 4 which isn't primary band for most carriers. They need to do a comprehensive multi-band test.
Score: 28 Votes (Like | Disagree)

I don't even know why they bother mentioning max theoretical speeds. Like yeah, if nobody else is connected to the tower, and you're standing 10ft away from the tower, and the weather is perfect and the sun is down and general network congestion on the ISP and backbones are low, and if you're not holding it but have it mounted from a specific point using a tripod that has non-metal contact points then maybe. Meanwhile in the real world, you've hit the jackpot if you get close to 100Mbps on any given speed test, and typically can expect 30-60Mbps.
Score: 15 Votes (Like | Disagree)

imran5720
That's not so bad, so wondering why it feels so bad in real-world, iPhone Max reception is really bad in low signal area
Score: 9 Votes (Like | Disagree)

decypher44
In reality, it’s actually worse. This is by far the worst iPhone I’ve ever owned (Max). I was going to upgrade early, but I guess I’ll wait until 2020.
Score: 9 Votes (Like | Disagree)

Freida
did they really need each chart with different colours? Couldn't they keep the same one for simplicity? :D :D :D
Score: 8 Votes (Like | Disagree)

GeneralChang
C'mon, PCMag, was it too hard to keep the colors consistent from one graph to the next?
Score: 8 Votes (Like | Disagree)
Read All Comments