Apple today announced that it is opening a retail store at the renewed Carnegie Library in Washington, D.C. on Saturday, May 11, as noted by 9to5Mac. The grand opening will take place at 10:00 a.m. local time. 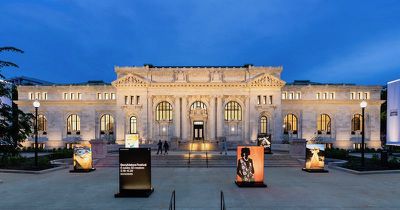 The store opening will follow months of renovations to Carnegie Library led by Apple, architecture firms Foster + Partners and Beyer Blinder Belle, and the Historical Society of Washington, D.C. Apple's store is expected to have a "subtle" presence that respects the historic integrity of the building.

"Together, let's create the next chapter," says Apple. "Inspired by the rich history of Carnegie Library, we are reimagining Apple Carnegie Library as a brand-new space to learn. Where everyone is welcome to come and discover all kinds of creativity, connect with new ideas, and share their stories."

To celebrate the grand opening, Apple will be hosting special Today at Apple sessions at the store between May 18 and June 29. The so-called StoryMakers Festival, led by GoldLink, Nigel Barker, No Kings Collective, and more, will focus on storytelling with photos, music, video, and art and design.

Thrilled to share the news about our new home in Washington, D.C. — Apple Carnegie Library, opening May 11. It’s an honor to continue the legacy of this beautiful building as a place where people seek knowledge and a sense of community. pic.twitter.com/xI3Hi08y7m — Tim Cook (@tim_cook) May 1, 2019

Apple's plans to open a store at Carnegie Library were first revealed back in 2016. The 116-year-old building is located across the street from the Washington Convention Center in Mount Vernon Square in Downtown Washington, D.C.

And most importantly, to buy Apple products.

Why does Apple always portrait the pursuit of its own corporate interests as a holy mission to save mankind?

As a local you misunderstand. The Carnegie library was a historic building located near Chinatown that really useless. I’ve only seen it used for weddings and a few private venues. Nobody actually visits the Carnegie library and before it kinda looked like a void of space (with an old stone building).

Now. Apple restored the entire building both internally and externally (it looks FANTASTIC now) especially the landscaping and the renewed stone.

They are bringing in traffic to an old building again, as they aren’t taking up the entire presence at the Carnegie Library. Even the logo is just a small blip on the window. Us Washingtonians (and tourists) have another historic structure renewed that is actually visitable.

On top of that, we now have the most accessible Apple store in the District (the Georgetown one is on the edge of the city and not metro accessible).

So as a local, apple helped by brining an Apple store, which in itself is an economy booster for its immediate area, and restored one of our old historic structures, while also not dominating the space and leaving a good portion for its original intention (similar to grand central in NY)
Score: 17 Votes (Like | Disagree)

AngerDanger
Really hoping Apple hasn't changed much of the iconic building. The molding, the frieze, the ever-presesnt ominous sky.

('https://www.macrumors.com/2019/05/01/apple-store-carnegie-library-dc-opens-may-11/')
"Together, let's create the next chapter," says Apple. "Inspired by the rich history of Carnegie Library, we are reimagining Apple Carnegie Library as a brand-new space to learn. Where everyone is welcome to come and discover all kinds of creativity, connect with new ideas, and share their stories."

And most importantly, to buy Apple products.

Why does Apple always portrait the pursuit of its own corporate interests as a holy mission to save mankind?
Score: 4 Votes (Like | Disagree)

Thanks for the information. :)

Why is it that nobody "actually visits" the library? Are the books gone?

It wasn't an active library and hasn't been for many years since the MLK Library opened up down the street. It was just an empty building that was used as an event space.
Score: 3 Votes (Like | Disagree)

Thanks for the information. :)

Why is it that nobody "actually visits" the library? Are the books gone?

It’s weird. It just sat there and wasn’t a huge attraction. And while the area around it had lots of foot traffic, the library itself didn’t. I thought it was just closed for the longest time, and it wasn’t in the best shape.

I think by having it inside it’s a great way for people who come solely for the Apple store to be like “Wow this building is neat, I wonder what else there is, let’s explore”. Great for people waiting on service. In essence it lures people in, in a good way.

The Carnegie library benefits because they were using empty space as a occasional venue space. Now it’s an Apple store, bringing THEM more continuous rent revenue - and restoring the entire building and external landscape. The building finally looks the way it should.

Local businesses nearby will benefit, and new businesses will open up - brought by increased foot traffic for the Apple store and the attractive newly renovated Library.


Yeah apples marketing can get too cheesy sometimes. But they did something right here.
Score: 3 Votes (Like | Disagree)

Amacfa
I live near this building and drive by it everyday. Been delayed for the longest time.

Funny because they just laid down grass rolls a few days ago and finished the outer landscaping. It looked like they were wrapping up. Funny this article pops up

It’s looking much nicer than it did! And we really needed a Apple store on this side of the city. Mt. Vernon/Chinatown is going to get even more traffic than it already does
Score: 3 Votes (Like | Disagree)
Read All Comments