Apple continues to dominate when it comes to customer support, according to Laptop Mag's annual tech support showdown, which is designed to help customers determine which companies are offering the most reliable customer service in the tech industry. 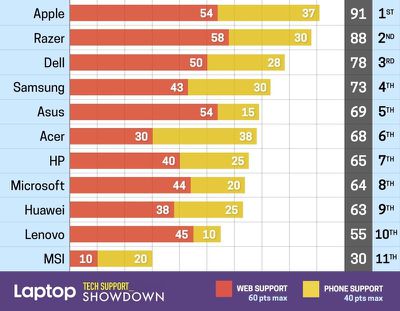 In a more in-depth breakdown of Apple's score, Laptop Mag says its editors queried Apple about Dark Mode in macOS Mojave, disabling automatic updates, and turning off the webcams (something not possible).

Live chat was determined to be the best Apple support experience, and it took between 4 and 9 minutes for live chat staff to walk Laptop Mag through answers to its queries. Phone support was also quick, thorough, and helpful.

Larry was surprised when I told him I wanted to disable the MacBook Air's webcam. After saying he typically just puts tape over his webcam, Larry asked me to wait for 3 to 5 minutes while he checked to see if anything else were possible. Two minutes later, Larry was back on the call to walk me through the System Preferences app and show me how to disable webcam access, app by app. He also noted there might be a "fancier" way to disable the webcam via the Library (it's actually in the Terminal program), but that this was easier.

Few companies even came close to beating Apple's score of 91 in the Tech Support Showdown, but Razer, the number two company, scored an 88 and Dell scored a 73. Apple competitor Samsung earned a score of 73, while Microsoft got a 64.

As always, Laptop Mag arrived at these scores by posing as everyday PC and Mac users to get answers to three questions from major laptop manufacturers. Both the online and telephone support systems were tested. 100 points total were possible, 60 from online support because it's a more popular way to get help, and 40 from phone support.

I have only reached out to them a few times ....For some reason I prefer searching thru forums to fix things myself. ;)

But when I have contacted them, they have always been pretty knowledgeable and very polite.
Score: 11 Votes (Like | Disagree)

nvmls
Hilarious chart, Razer and Dell? epic troll. Also, Apple's service is very inconsistent when outside of the U.S.
Score: 7 Votes (Like | Disagree)

kemal
Then there is the cost of what should be reasonably priced repairs.
Score: 7 Votes (Like | Disagree)
Read All Comments