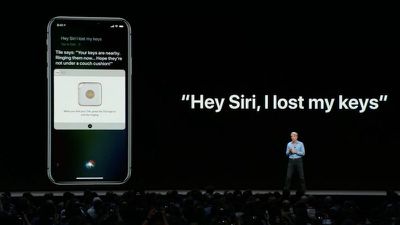 In a report today, Rambo detailed several other developer-focused features that he expects Apple to announce at WWDC in June, including the ability for iOS apps ported to the Mac to use Mac-specific features such as the Touch Bar and keyboard shortcuts along with support for multiple windows.

Rambo says enabling Mac support for an existing iOS app is "as easy as checking a checkbox" in Xcode, akin to adding iPad support to an iPhone app.

Developers are also expected to gain access to a handful of new frameworks that allow for expanded use of the Taptic Engine, document scanning in third-party apps, and the ability to capture photos from external devices such as cameras and SD cards without having to go through Apple's Photos app.

Last, on the Mac, apps will supposedly be able to offer file provider extensions, improving the integration of apps like Dropbox with Finder.

Rambo says enabling Mac support for an existing iOS app is "as easy as checking a checkbox" in Xcode, akin to adding iPad support to an iPhone app.

This is not good. iOS and macOS apps are two completely different beasts. Checking a box isn't going to make for a good user experience. This is basically what Apple did with apps like News and HomeKit and they are terrible.

Everybody: We don't care about Touch Bar
Apple: Let's double down on Touch Bar

Apple is driving me a bit crazy lately.
Score: 19 Votes (Like | Disagree)

SoN1NjA
Siri has becoming “more useful” for the past x years... or at least they say
Score: 16 Votes (Like | Disagree)

CrazyForCashews
'Siri' and the word 'useful' are two words that should never be used in the same sentence, aside from this one.
Score: 15 Votes (Like | Disagree)

benshive
Let's work on making Siri useful before we start trying to make her "more useful" ;)
Score: 12 Votes (Like | Disagree)

jpk3
for the love of god how about we just start with better voice recognition?
Score: 9 Votes (Like | Disagree)
Read All Comments