Apple has held talks with at least four potential suppliers of LiDAR sensors for self-driving vehicles, providing fresh evidence of the company's renewed ambitions to enter the autonomous vehicle space, according to Reuters. 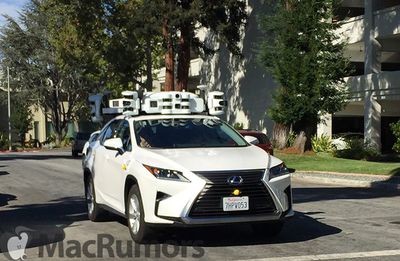 Apple has been using Lexus SUVs with LiDAR equipment to test autonomous technologies
The report claims Apple is seeking LiDAR units that are "smaller, cheaper and more easily mass produced" than current systems, which can cost over $100,000 and are considered "too bulky and prone to failure" for use in mass-produced vehicles. Apple is said to be "setting a high bar" with demands for a "revolutionary design."

While it remains unclear whether the goal of Apple's so-called "Project Titan" is to build its own vehicle or supply self-driving hardware and software to other automakers, the report says Apple wants to control the "perception stack" of sensors and software for autonomous vehicles, regardless of who makes it.

In addition to evaluating potential outside suppliers, Apple is believed to have its own LiDAR sensor technology under development, the report adds.

The report claims the next-generation LiDAR sensor designs that Apple is seeking could potentially be made with semiconductor manufacturing techniques, potentially significantly lowering costs, but the sources cited say Apple has not been happy with most of what it has seen so far.

Last year, Apple rehired its former VP of Mac hardware engineering Doug Field to work on Project Titan after a five-year stint as Tesla's engineering chief. Apple has a team of about 1,200 employees working on the project, according to court documents, but recent restructuring led to 190 layoffs.

Apple has been testing and developing autonomous driving software out on the streets of Cupertino, California, using Lexus SUVs, since early 2017. It's still unclear if we'll ever see a so-called Apple Car, but analyst Ming-Chi Kuo believes a release wouldn't be until 2023 to 2025 either way.

Seems the entire auto industry, except Tesla, has (for years now) hinged their future of auto driving to LiDAR sensors which are having trouble getting over to cheap solid state sensors. Tesla uses a combination of visual cameras and radar sensors.

LiDAR seems a lot like hydrogen fuel cells - it's smoke and mirrors being thrown up by companies that are lagging behind. Make it sound like you're not lagging behind by saying that you're trying to go do something else.

The premise that LiDAR is necessary to drive a vehicle is so obviously BS. Humans have been driving vehicles well enough for over 100 years with nothing more than two cameras. Humans can drive vehicles remotely with nothing but cameras. Having LiDAR can certainly assist with driving a vehicle, just as radar and sonar can, but it's obviously not required despite every company that isn't Tesla (or Comma AI) insisting that it is.
Score: 8 Votes (Like | Disagree)

69Mustang
tl;dr Apple is rumored to be looking at one of the implementations of solid state LiDAR. Pretty much everyone is as well. This is a good thing. The more vendors exploring the different versions of solid state, the greater the chances that some beneficial tech emerges.
Score: 5 Votes (Like | Disagree)

Self driving cars. Something nobody really wants. I understand the attraction of having an auto pilot to take you to the hospital if you're too incapacitated to drive and you're losing blood or something but beyond that there's been too many incidents with self-driving vehicles that resulted in death. I suppose the same could be said for human piloted vehicles too but....

Check your safety data. One of the main benefits IS safety.

MistrSynistr
No-one asked for self driving cars. Why is this being pushed on us?

WE WANTED THEM TO FLY.
Score: 4 Votes (Like | Disagree)

Can produce a 'revolutionary' autonomous vehicle but can't produce a charging mat?

No one else has been able to produce what they were trying to accomplish with the AirPower either.
Score: 3 Votes (Like | Disagree)
Read All Comments