Apple will be donating to Notre Dame rebuilding efforts to help restore the historic cathedral in Paris, according to a tweet from its CEO Tim Cook. 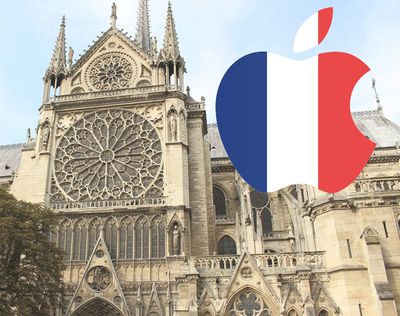 Notre Dame was significantly damaged in a fire on Monday. While the cause of the blaze remains unknown, the cathedral had been undergoing renovations, and at this point it is believed that it may have been accidental. Fortunately, reports indicate that no lives were lost in the fire, but at least one first responder is injured.

We are heartbroken for the French people and those around the world for whom Notre Dame is a symbol of hope. Relieved that everyone is safe. Apple will be donating to the rebuilding efforts to help restore Notre Dame’s precious heritage for future generations.🇫🇷 — Tim Cook (@tim_cook) April 16, 2019

Cook did not indicate how much Apple will donate to the efforts. Less than 24 hours after the fire, French billionaires and other companies have already pledged over $450 million to help rebuild Notre Dame.
[ 173 comments ]

Yes, a fantastic marketing ploy. Why else would Apple do it? Because they really, really care? Let's not be naive.
[doublepost=1555425393][/doublepost]

Yes, it is the Catholic Church, which is a single entity.

The ignorance is strong on this one. It's owned by the French ministry of Culture. And for your information, it's also a UNESCO world heritage site, so this is equivalent to the Colosseum being destroyed. Have some respect for such sites, it's a piece human history for all our future generations to learn from, it's got nothing to do with religion or money at this point.
Score: 33 Votes (Like | Disagree)

Zxxv
Why is apple donating? The church has more money than most governments.
Score: 23 Votes (Like | Disagree)

There goes Tim donating money again. Why isn't he in his garage wrenching on the new Mac Pro????

Agreed! If Steve was still here he'd be down on the production line soldering the components and single-handedly leading the design, manufacturing, R&D, prototypes, and engineering.

Tim CROOK on the other hand just thinks other people should deal with this stuff while he worries about things like stock, or managing the operations. What kind of CEO does that?

Why is apple donating? The church has more money than most governments.

French churches are owned by the French state and funding depends solely on how charitable the government feels like. Before the fire it has been living with just 2 million euros each year, it's a miracle that it is still standing given how pathetically little amount of maintenance it has been receiving.

I'd also argue since the day of iTunes store's launch, artistic stewardship became an untold focus of Apple, and Jony Ive's near-insanity obsession with form confirms just that. Apple has been convincing the world it embodies art, and when a crisis situation like this one hits, making a statement is in Apple's interest.

MacLawyer
The stone walls still stand, but I wonder how much the heat has weakened them. I fear the restoration will take decades at the very least. Vive la France! Vive Paris!
Score: 16 Votes (Like | Disagree)
Read All Comments