Apple has introduced an extra confirmation step when App Store users purchase an app available on a subscription basis or tap to subscribe to a premium service in an app, making sure no accidental subscription purchases occur.

The new subscription feature was highlighted on Twitter by developer David Barnard this afternoon and appears to have been implemented recently. 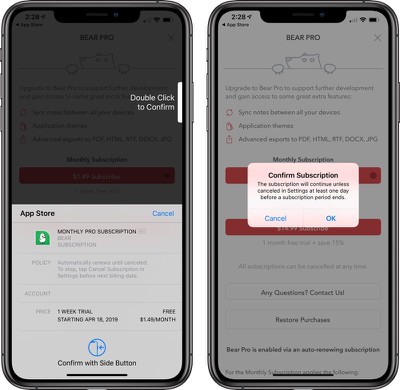 With this new confirmation step, when you download an app with a subscription or tap on a subscription option in an app where the subscription feature is optional, you'll see a second subscription popup warning after initially confirming a purchase with Face ID or Touch ID on your iPhone or iPad.

Whoa! Apple added an additional confirmation step for subscriptions. This new alert comes after you confirm with Touch ID/Face ID. I hope they address this in a more elegant way in iOS 13, but I’m thrilled Apple took a definitive step to curb scam subscriptions. 👏🏻 @pschiller pic.twitter.com/oktaEVdx0o — David Barnard (@drbarnard) April 11, 2019

The popup warns that the subscription will continue unless canceled in the Settings app at least one day before a subscription period ends, requiring users to confirm the notice with an OK button or tap cancel to cancel the initiation of the subscription.

Adding a second confirmation screen to subscription purchases will thwart app developers who have been using nefarious tactics to trick users into purchasing subscriptions or making subscription costs and terms unclear.

Accidental subscription purchases have been an ongoing problem with ‌Touch ID‌ iPhones where a purchase could be made unintentionally when putting a finger on the Home button (such as when pressing to exit out of the ‌App Store‌), but the new confirmation screen makes it clearer that you're initiating a recurring subscription on both Face ID and ‌Touch ID‌ iPhones.

Relentless Power
Good. Another way that Apple is protecting the user and is trying to hault scamming subscriptions.
Score: 14 Votes (Like | Disagree)

now i see it
automatic renewal of subscriptions is bogus. They should all have to be manually renewed each month with a simple prompt screen. Automatic rollover monthly payments should be only available as an opt in option. Not mandatory.
Score: 14 Votes (Like | Disagree)

A more elegant way? All you do is tap confirm. Does he want it to spiral into view with a cute animation or drop down as a banner or something? The point of this is specifically to be a hard stop requiring attention and user interaction.

I mean, sure, as long as it isn't anything too obtrusive or distracting. A subtle spiral could be nice.

Incredibly late. Billions have been stolen, but at least they got it done.

I'm not sure you've grasped the concept of what a subscription is...

---
sub·scrip·tion
noun
1.
[LIST=1]
* the action of making or agreeing to make an advance payment in order to receive or participate in something.

To be fair, what he’s suggesting would still fit that definition. It says nothing about automatic renewal.
Score: 7 Votes (Like | Disagree)

automatic renewal of subscriptions is bogus. They should all have to be manually renewed each month with a simple prompt screen. It's a money grab

I'm not sure you've grasped the concept of what a subscription is...

---
sub·scrip·tion
noun
1.
[LIST=1]
* the action of making or agreeing to make an advance payment in order to receive or participate in something.
Score: 6 Votes (Like | Disagree)

hipnetic
Sounds like a half-assed attempt at addressing some very real problems. I don't need a pop-up notification to alert me to something that I *just* did. I need a pop-up alert for something that's about to happen. Sure, if we're talking about Netflix or some other respectable company charging me a $10/month subscription, this isn't a big deal. My concern (which I've been hit with - blame my wife) are situations where you download a "free" app, get an automatic "free trial" subscription, and after that free trial, it automatically converts to a $100/year (or whatever) subscription.

It would also help if Apple didn't make it so damned difficult to locate all of the subscriptions you've purchased through the App Store. There should be a quick and easy way to find all of your current subscriptions, but there isn't. It's buried through a convoluted mess of menus that aren't intuitive at all.
Score: 5 Votes (Like | Disagree)
Read All Comments

Friday July 30, 2021 9:04 am PDT by Sami Fathi
Tesla CEO Elon Musk reportedly once demanded that he be made Apple CEO in a brief discussion of a potential acquisition with Apple's current CEO, Tim Cook. The claim comes in a new book titled "Power Play: Tesla, Elon Musk and the Bet of the Century," as reviewed by The Los Angeles Times. According to the book, during a 2016 phone call between Musk and Cook that touched on the possibility of ...
Read Full Article • 202 comments

Friday July 30, 2021 5:44 am PDT by Hartley Charlton
The most important TSMC factory that manufactures Apple's chips destined for next-generation iPhone and Mac models has been hit by a gas contamination, according to Nikkei Asia. The factory, known as "Fab 18," is TSMC's most advanced chipmaking facility. TSMC is Apple's sole chip supplier, making all of the processors used in every Apple device with a custom silicon chip. Industry...
Read Full Article • 109 comments