Apple today shared a new privacy-focused iPhone ad on its YouTube channel. The ad will premiere tonight and air through March Madness in the United States before expanding to select other markets globally.


The 45-second video starts with the tagline "privacy matters" and then shows a variety of humorous if not slightly awkward situations where people would want their privacy protected in everyday life. In one scene, for example, two men briefly pause their conversation while a waitress is at their table.

"If privacy matters in your life, it should matter to the phone your life is on," the ad concludes. "Privacy. That's ‌iPhone‌."

The ad arrives around six weeks after a major FaceTime bug was uncovered that allowed one person to call another person over FaceTime and listen to that other person's audio without the call being answered. Apple fixed the bug in iOS 12.1.4 and apologized, but it certainly wasn't good for its reputation. 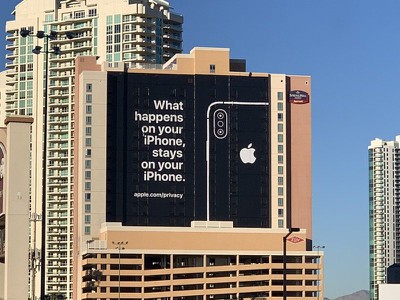 Bugs aside, Apple really does place an emphasis on privacy, especially compared to some other tech giants like Facebook. Apple has long said it believes privacy is a "fundamental human right," and as part of that, it aims to minimize its collection of customer data and disassociate it from an individual user when it does.

macduke
This was really well done. It's so true that people don't even want a stranger leering at them for more than a few seconds or standing too close to their conversation before feeling very uncomfortable, and yet so many people don't bat an eye that all of their personal photos and information are being spread all over the internet. It's this really weird disconnect and I think this commercial does a pretty good job capturing that.
Score: 60 Votes (Like | Disagree)

Relentless Power
This is a strong suit for Apple, is privacy. They need to market what they value, it’s not just about the hardware, it’s about valuing the consumers security in today’s digital era of cyber crime. No other smart manufacturer values the consumers privacy and security the way Apple does, period. It’s one of the core reasons why I choose to support Apple.
Score: 39 Votes (Like | Disagree)

KPandian1
Then they should fire every Google and FaceBook App in their "store".
Score: 21 Votes (Like | Disagree)

Until you stop demanding billions from Google there Timmy your supposed “Stance on Privacy” is nothing more than hot air and ********
Score: 21 Votes (Like | Disagree)

photographypro
If Apple is so concerned about privacy, WHY can't you reply to a FaceTime call in AUDIO ONLY mode?

I've requested this for YEARS on Apple's website. Maybe you're not dressed or in the bathroom or having a bad hair day. SO SIMPLE to implement this. Sometimes I get a FaceTime call and I WANT to talk to the person, but I don't want them to see me.
Score: 17 Votes (Like | Disagree)
Read All Comments