Ahead of CES, Apple Puts Up Billboard Touting Privacy in Las Vegas

In the heart of Las Vegas, where the Consumer Electronics Show is set to kick off next week, Apple has put up a giant sign touting the security of its devices. 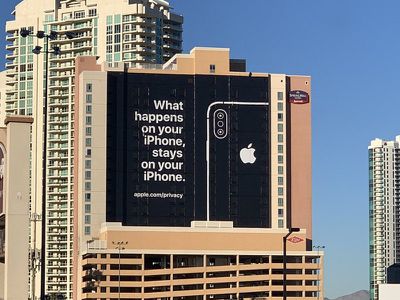 Apple never shows up at CES, so I can’t say I saw this coming. pic.twitter.com/8jjiBSEu7z — Chris Velazco (@chrisvelazco) January 4, 2019

CES will see thousands of tech industry attendees, members of the media, and tech exhibitors, and Apple's decision to put up a billboard here is interesting as the company does not have a presence at the show.

Apple competitors like Amazon, Samsung, and Google will be present at CES showing off smart home devices, smartphones, and other products, and while Apple employees are likely to be in attendance, Apple will not be highlighting any of its devices at the event.

It's not entirely clear when the billboard was put in place, but it seems clear that it's aimed at CES attendees who will be seeing products from companies with less of a privacy focus like Google and Amazon. Apple is not-so-subtly reminding the tech industry of its heavy emphasis on privacy, with the billboard offering up a link to Apple's dedicated privacy website.

The Consumer Electronics Show starts on Tuesday, January 8 and lasts through the end of the week.

Yeah unless iCloud gets hacked...

Yeah unless iCloud gets hacked...

If they aren't going to be there, why the ad? It's like that kid that didn't get invited to the party.

Do they need someone to be wherever they put an ad up? What a ridiculous statement.

I wish more people cared about the serious lengths Apple takes to protect user privacy as opposed to certain other companies.
Score: 39 Votes (Like | Disagree)

Doctor Q
It's a clever play on "What happens in Vegas, stays in Vegas."

I think it's smart of Apple to promote one of its strengths compared with the other big players. I'm always astounded at the number of consumers who don't pay attention to their own privacy and the use of their personal information. Perhaps this ad will get the attention of some of them.
Score: 35 Votes (Like | Disagree)

Whatever, the iCloud backups were compromised and data stolen.... And who's to say it's never gonna get hacked or compromised in some way in the future. You can't.

what a vacuous statement. "whatever" completely disregarding the information people provide to better help you understand. "Who's to say it's never gonna get hacked or compromised in the future" Who's to say that about anything? Better become amish bro.
Score: 31 Votes (Like | Disagree)

HiVolt
Yeah unless iCloud gets hacked...

Thursday January 26, 2023 6:30 am PST by Tim Hardwick
The new Mac Pro coming later this year is expected to feature the same spacious modular design as the 2019 model, but with fresh concerns over its lack of upgradeability surfacing, some users are beginning to wonder what the transition away from Intel architecture actually means for Apple's most powerful Mac. The current Intel Mac Pro that Apple sells is popular with creative professionals...
Read Full Article • 495 comments