Apple Music may be soon be available as an option on Google Home devices, according to an image that was shared by MacRumors reader Jason.

We were able to track down the ‌Apple Music‌ listing within the Google Home app for iOS devices, but at the current time, it can't be linked to a Google Home device. 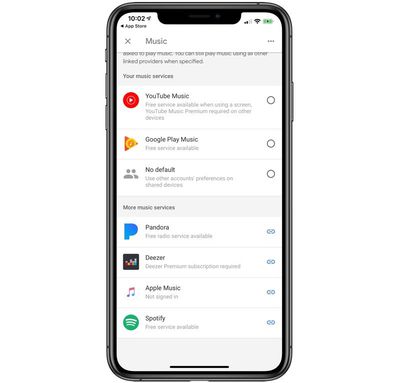 In previous versions of Google's software, ‌Apple Music‌ was listed in a separate "limited availability" section of the app and also "Only available on iOS devices". The updated listing suggests that Apple could soon make ‌Apple Music‌ an available option for Google Assistant-powered playback on Google Home devices, much like it did with the Amazon Echo.

The ‌Apple Music‌ listing appears to be relatively new, and given that it's not working, it suggests an upcoming feature.

Update 2: ‌Apple Music‌ is no longer showing up as an option in the Google Home app.

MysteryMii215
This just in: Hell continues to freeze over.
Score: 10 Votes (Like | Disagree)

LIVEFRMNYC
A little too late, myself and damn near everyone I know moved to Spotify, from Apple music or Google Play.
Score: 8 Votes (Like | Disagree)

Abazigal
Makes sense. Apple is not going to release cheap smart speakers, and this is an excellent way to ensure their services are supported on as many devices as possible. Meanwhile, the HomePod is still there for people willing to pay a premium for the best Apple experience.

As for Apple giving up on the smart phone, I will say that fears of that are overblown. The smart home is far from over, and who is to say that it’s current incarnation is even the right one?

With renewed focus on privacy, I will say google and amazon should be more worried about their current strategy than Apple.
Score: 8 Votes (Like | Disagree)

Apple will never compete in the sub $50 speaker category so they have nothing to lose by making Apple Music available everywhere where Spotify is available.

Spotify’s entire revenue comes from their service. Apple Music exists to keep people in Apple’s ecosystem, buying iPhones, iPads and Apple Watches which is where Apple makes their real money.

In the same way that Apple didn’t give up on Macs and iPods when offering iTunes on Windows PC’s, there is still room for HomePod as the native Apple Music experience for those who want superior audio.
Score: 7 Votes (Like | Disagree)

A little too late, myself and damn near everyone I know moved to Spotify, from Apple music or Google Play.

It’s not too late. It’s a subscription. People can change at any time. It’s easier now than ever to change to Apple Music and take your Spotify library and playlists with you. There are apps like SongShift that do all the work and I wouldn’t be surprised to see Apple build in a Spotify migration tool into Apple Music.

You just spelled out why Apple is doing this. Apple users had been forced to sign up for Spotify because they had no other choice when getting a Google Home or Amazon Echo, both very popular because of their low price. Now, they can stay on Apple Music which builds loyalty and keeps them in the Apple ecosystem where they’re buying iPhones and other Apple devices.
Score: 6 Votes (Like | Disagree)

Well, that's great. But from Apple's standpoint it's a move that will allow customers to just walk away off Apple ecosystem. And not losing anything by doing it.

I already love Music app on iOS and Android (instead of bloated iTunes). Add Google Assistant support for it and boom, you're able to enjoy AM at its fullest.


Next: iMessage app for my Windows 10 desktop

Really? You think people are only in Apple’s ecosystem because they absolutely must have Apple Music? Not like there’s Spotify or anything available on other platforms or anything.

No, it’s the other way around. People are on Apple Music because it’s the native music solution to their decision to own an iPhone.

Offering Apple Music everywhere where Spotify is available keeps people on Apple Music which in turn keeps them inside of the Apple ecosystem.

What this move does is make life very difficult for Spotify. Now an iPhone who might own a Google Home or an Amazon Echo doesn’t have to abandon Apple Music and sign up for Spotify because they had no Apple Music as a choice. Spotify is no longer the default, almost exclusive choice.
Score: 5 Votes (Like | Disagree)
Read All Comments