Over the last month we've learned that Apple is readying an Apple News service that will provide access to paywalled news content and magazines for a monthly fee. As we understand it, Apple will keep 50 percent of all subscription revenue and the other half of the revenue will be split among publishers. 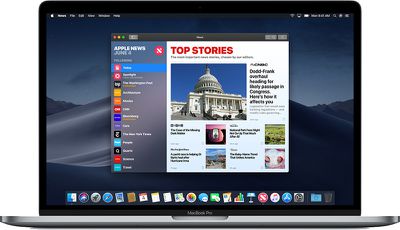 Apple is said to be launching the service in March, but despite magazine publishers reportedly already on board with the 50/50 revenue agreement, other reports suggest the company is having trouble negotiating financial terms with news-focused publishers.

A new report today by Digiday offers further insight into the struggle news publishers have been consistently facing on the platform, with some admitting monetization on ‌Apple News‌ "remains a slog." Many of the challenges boil down to their larger dependence on ad revenue and how ‌Apple News‌ is inherently incompatible with traditional online ad targeting sales strategies.

Ad revenue is bogged down by advertisers’ disinterest in the ad inventory that publishers are selling directly, and by remnant ad fill rates that many publishers describe as abysmal, even after a modest improvement to start the year, sources said. One source said their publication earned “low five-figures” every month from Apple News; another said they earned less than $1,000 per month.

According to sources that spoke to Digiday, publishers are having trouble selling ‌Apple News‌ ad inventory directly because of the platform's limited user targeting, which doesn't allow the use of third-party data or IP addresses, and an inability to reconcile current sales strategies that rely on programmatic advertising (something ‌Apple News‌ also prohibits).

One publisher source said that until the beginning of 2019, the fill rate on their remnant Apple News inventory was less than 20 percent, which was considered an "atrociously low" number that made it less lucrative than publishing through Google’s AMP format or even Facebook Instant Articles, which many publishers abandoned because of monetization issues.

Despite the challenges, all the publishers who spoke to Digiday reported steady audience growth over the past year and more referral traffic from ‌Apple News‌ than Facebook. Getting articles in the Top News widget can drive "enormous" boosts in traffic, said one source. Another said that articles featured in the platform's content recirculation widget, which recommends stories for users to read next, can make a story one of the highest-read stories a publisher can share in a month.

Dampened excitement for ‌Apple News‌ among publishers is said to have pushed some to look at working with the platform in other ways not directly tied to monetization, such as how it can be used to encourage users to download podcasts, encounter paywalls, and convert readers to newsletter subscribers.

‌Apple News‌ is said to have around 90 million regular users, comprising nearly 70 million monthly unique users in the U.S. and 20 million international users. Regardless of the challenges in penetrating such a huge potential market, some publishers told Digiday they appreciate where Apple is coming from. "I respect Apple and that they believe in privacy," one source said. "It just makes it incredibly challenging to sell there."

Good. Try asking people honestly if they want to pay for a subscription instead.

Oh they don't, do they? Try handling their credentials with more confidence and care instead of selling their information to anyone who asks for it, and try improving the standards of your journalism so people are actually interested. Just an idea.

I'd add, try getting back to objective, factual news instead of making everything an opinion piece.

I don't care what some random 21 year old journalist thinks about something about which they have no expertise. Give me the who, what, where, when, and why and let everyone else think.
Score: 23 Votes (Like | Disagree)

Ishayu
Good. Try asking people honestly if they want to pay for a subscription instead.

Oh they don't, do they? Try handling their credentials with more confidence and care instead of selling their information to anyone who asks for it, and try improving the standards of your journalism so people are actually interested. Just an idea.
Score: 19 Votes (Like | Disagree)

I don’t get why apple are launching a service when you have news aggregator websites already there.

I can’t believe Apple are releasing an MP3 player when there are already MP3 players out there.

I can’t believe Apple are releasing a phone when there are already phones.

Time’s always the best judge. Apple don’t often drop the ball on moving to new markets — give it a few years. :)
Score: 15 Votes (Like | Disagree)

nwcs
Part of the problem with these news sources is that even if you pay for access they still want to sell your data for more money on the back side. I would gladly pay for a service such as Apple’s where I’m presumably guaranteed not to have as much of my personal data monetized without my approval.
[doublepost=1551098641][/doublepost]

Ah, yes, just like Apple music, Apple want to take other people's content and make a profit from it.

How is that different from a newsstand of magazines and newspapers?
Score: 12 Votes (Like | Disagree)

hybroid
Good. Nothing of value will be lost in today's clickbait garbage 'journalism' if they disappear.

The BBC will always exist.
Score: 10 Votes (Like | Disagree)

DoctorTech
I want this to work. I've often encountered pay walls at WSJ and other news sources when I followed links from news aggregators. I really don't mind paying for good content but I don't want to have to buy subscriptions to 20 news sites just to read 1or 2 articles from each of them every month. I really like the idea of paying for 1 service that gives me access to good quality news content.

Regarding ads, while I would prefer to not get ads at all when I am already paying for the service, this is a very common model. Every physical newspaper and magazine I have ever purchased still contained ads. Hopefully, Apple News will make them less annoying (i.e. no flashing ads, no content covering pop ups, etc.). I also EXPECT Apple to safeguard my privacy. It is nobody's business what type of articles I read and I don't want that information compiled and sold.
Score: 9 Votes (Like | Disagree)
Read All Comments