Apple and investment bank Goldman Sachs plan to launch a joint credit card later this year, according to The Wall Street Journal. 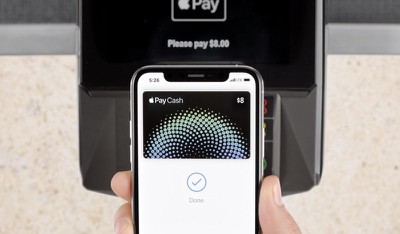 The report claims the card will be rolled out to Apple employees for internal testing in the next few weeks and officially launch later this year. The card would be accessible through the Wallet app on iPhone, potentially with unique features for setting spending goals, tracking rewards, and managing balances.

Executives have discussed borrowing visual cues from Apple's fitness-tracking app, where "rings" close as users hit daily exercise targets, and sending users notifications about their spending habits. There also could be notifications based on analysis of cardholders' spending patterns, alerting them for example if they paid more than usual for groceries one week.

The card will be issued by Goldman Sachs and use Mastercard's payment network, according to the report. The card is said to offer around two percent cashback on most purchases and potentially more on Apple products and services.

I have to wonder whether by 'spending goals' they mean 'spend at least £X,000 per month in credit' (preferably on Apple products and services) gotta close those rings o_O
Score: 17 Votes (Like | Disagree)

ipedro
All of this makes sense in the big picture if you recall the past to see where Apple is going in the future. Apple has a history of disrupting boring and/or broken markets that deliver services that people need but that they use only reluctantly because there are no alternatives.

Apple made the computer accessible and fun. It’s easy to forget but computers were for crunching numbers, mostly the realm of nerds who knew how to operate the command line. The Mac changed everything.

Apple disrupted music in the same way. The iPod came at a time when piracy was rampant. It was a terrible experience though. You’d download programs like Napster or Limewire and download music, not knowing if you’d get a bad recording and would end up with a junk pile of disorganized mislabelled music in folders. iPod + iTunes made it easy to pay a fair price for music and get a properly organized collection. That’s why it became so popular that nobody ever really caught up.

Apple is now pursuing two other sectors that absolutely need to be disrupted. Health and financial services. Both are full of bureaucracy and not consumer friendly. The only ones who do well in either are insiders or experts in those fields.

Apple is on one hand opening up health records to make our data our data, easily accessible and making it useful by helping us to be proactive and knowledgeable to improve our own health.

Now, on the other hand, most of us hate having to deal with banks, hidden fees and overly complicated services. Apple Pay has already made it easier and safer on the transaction side. Money management and growth is the next obvious step. I’m very interested to see what Apple does here.
Score: 11 Votes (Like | Disagree)

jclardy
Ah yes, you have to close rings by spending more money. Plus they can give you notifications - "Looks like you haven't spent enough money today, tap here to buy an iPad mini to hit your spending goal!"
Score: 9 Votes (Like | Disagree)

Sasparilla
Goldman Sach's has terrible optics - at least in the U.S. (they were actively playing both sides of the field knowingly helping to drive the U.S. housing market over the cliff and betting to profit off the crash, 5crew the country, that caused the financial crisis back in 2008 or so). When it comes to taking care of the customer or not doing something illegal - history has shown they actively choose the 3rd option which is do what makes the most money if they think they can get away with it (if that includes actively misguiding customers so be it).

Having Apple team with them is very disappointing - its almost like having Apple partner with the mob on a credit card - especially since Goldman is not a normal bank and doesn't normally do credit cards (that I know of). There must be something special in it for Goldman, for them to be doing this....I'd much rather have Apple stick with Barclay.
Score: 9 Votes (Like | Disagree)
Read All Comments