iPhone XS Max users experience more than two times faster real-world LTE data speeds as ‌iPhone‌ 5s users on average in the United States, according to OpenSignal, although there are caveats to consider. 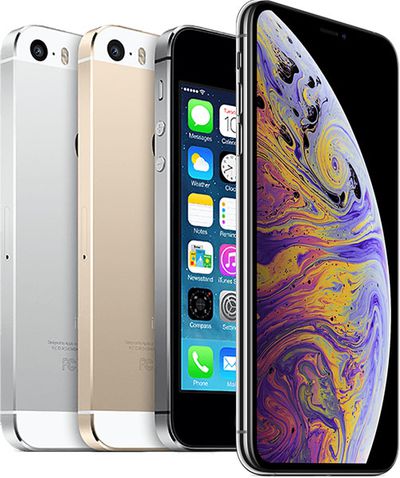 OpenSignal says it measured speeds on hundreds of thousands of iPhones across the United States from October 26, 2018 to January 24, 2019 and found that ‌iPhone‌ XS Max users experienced an average LTE download speed of 21.7 Mbps compared to just 10.2 Mbps for ‌iPhone‌ 5s users.

OpenSignal attributes the faster data speeds on newer iPhones to improved modems and antenna designs in those devices, such as 4x4 MIMO support in the ‌iPhone‌ XS and ‌iPhone‌ XS Max compared to 2x2 MIMO on older iPhones, but the results are also likely influenced by socioeconomic factors.

Someone who is still using an ‌iPhone‌ 5s in 2019 could be a price-conscious consumer who is unable to justify the cost of upgrading to a newer ‌iPhone‌, for example, while relying on a discount carrier with inferior wireless coverage or capped data speeds compared to major carriers such as Verizon and AT&T.

That said, while the results may be somewhat skewed, a newer ‌iPhone‌ should be able to achieve faster data speeds than an older ‌iPhone‌, assuming it's connected to a cellular tower with the latest LTE equipment.

Ds6778
Must be a slow news day. This has to be the dumbest headline I’ve ever read.
Score: 50 Votes (Like | Disagree)

Must be a slow news day. This has to be the dumbest headline I’ve ever read.

New phone with newer tech is faster than old phone with older tech!! Who knew?!
Score: 27 Votes (Like | Disagree)

Must be a slow news day. This has to be the dumbest headline I’ve ever read.

For anyone hanging on to old retired technologies, stories like this help identify clear advantages to buying a new device.
Score: 12 Votes (Like | Disagree)

Wait... people are out there still using an iPhone 5s?

Yup.
On a real, live iPhone 5S as we speak, LTE just tested:

For anyone hanging on to old retired technologies, stories like this help identify clear advantages to buying a new device.

Thursday September 29, 2022 12:38 pm PDT by Juli Clover
Tony Blevins, Apple's vice president of procurement, is set to depart the company after he made a crude comment about his profession in a recent TikTok video, reports Bloomberg. Blevins was in a video by TikTok creator Daniel Mac, who was doing a series on the jobs of people he spotted with expensive cars. After seeing Blevins in an expensive Mercedes-Benz SLR McLaren, Mac asked Blevins what ...
Read Full Article • 744 comments

Friday September 30, 2022 12:51 pm PDT by Juli Clover
Apple CEO Tim Cook has been touring Europe this week, sitting down for interviews with various media publications. Augmented reality has been a running theme in Cook's discussions, and it is a topic he brought up again in an interview with Dutch publication Bright, which is part of RTL News. "I think AR is a profound technology that will affect everything," Cook said, echoing comments from...
Read Full Article • 305 comments

Sunday October 2, 2022 6:41 am PDT by Joe Rossignol
Apple is developing new iPad Pro, Mac, and Apple TV models, and at least some of these products will be released in October, according to Bloomberg's Mark Gurman. However, Gurman continues to believe that Apple is unlikely to hold an event this month. In the latest edition of his Power On newsletter, Gurman said "the big iPhone 14 unveiling last month was probably it for Apple in 2022 in...
Read Full Article • 169 comments