Misuse of Apple's enterprise developer program certificates continues to make news, with a new report from Reuters outlining how software pirates have been using the program to distribute hacked versions of popular apps like Minecraft, Pokemon Go, Spotify, Angry Birds, and more. 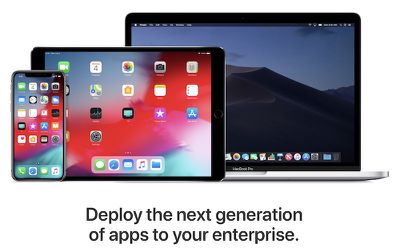 Using so-called enterprise developer certificates, these pirate operations are providing modified versions of popular apps to consumers, enabling them to stream music without ads and to circumvent fees and rules in games, depriving Apple and legitimate app makers of revenue.

The software pirates in turn make money by charging some users annual subscription fees for "VIP" versions of their hacked apps that are "more stable than the free versions."

After being alerted by Reuters to these developer accounts being used to distribute hacked apps, Apple removed a number of them, but more have since sprung up to take their place.

Revelations regarding abuse of Apple's enterprise developer program surfaced late last month, led by word that Facebook and Google were using the program to distribute market research apps to users that were capable of tracking all of their online activity in exchange for rewards.

Apple briefly revoked enterprise certificates for both companies, which had the side effect of temporarily disabling Facebook's and Google's internal apps including custom testing versions of their own public apps as well as private internal apps for corporate use such as transportation and food.

And just yesterday, additional abuse of Apple's enterprise program came to light in the form of apps featuring adult content and gambling that can not be distributed through the traditional App Store due to Apple's rules prohibiting or limiting those types of content.

Apple today announced that as of February 27, all developer accounts will require two-factor authentication to be turned on, a move that will help secure these accounts and limit their ability to be traded or sold amongst those seeking to skirt Apple's rules.

In other words, Apple wants to close loopholes to bypass Apple App Store and services to guarantee their 30% cut even for legit apps like Kodi. This is equivalent to if Google was to reverse their current policy by removing legit apps like Kodi from Google Play Store then disabling side loading of apps.

Apple never allowed this sort of abuse. It was done nonetheless. Go use android , if you want to install your favorite malware.
Score: 15 Votes (Like | Disagree)

Pepe4life
People have been sideloading apps through this method for years. Apple is well aware of this. The fact that they are doing a massive crackdown now is probably because their revenue is increasingly dependant on the "services" category.

Perhaps Tim can quit exerting so much control over what I want on my phone. Why can't I have torrent clients? Why can't I set custom DNS?
Score: 9 Votes (Like | Disagree)

In other words, Apple wants to close loopholes to bypass Apple App Store and services to guarantee their 30% cut even for legit apps like Kodi. This is equivalent to if Google was to reverse their current policy by removing legit apps like Kodi from Google Play Store then disabling side loading of apps.

THis isn’t a loophole. It’s people violating the developer agreement they entered into.
Score: 8 Votes (Like | Disagree)

To those who think Apple is cracking down more because they only want people to go the App Store, or because they want more revenue from services, etc. you obviously haven't been paying too much attention to Apple since, well, forever. Apple has NEVER allowed public Apps outside the App Store, such a concept was probably never even a glimmer in Jobs or Cooks eye. You can argue all you want about Apple to taking too big a cut (30% is arguably too much), or the pitfalls of Apple's walled garden, or your frustrations with it, etc. The bottom line is Apple has always revoked enterprise certificates when they've been misused, and Apple will ALWAYS require developers to release their apps on the App Store.

The fact that we're hearing more about this is, like I said above, probably because of the FB and Google fiasco. In addition, other developers may be abusing the enterprise certificates more because jailbreaking is no longer a viable option - so if you want to provide an App that does things against the App Store TOS, the only way to do so without a jailbreak is by abusing the enterprise certificate.

Finally, I have a pretty strong feeling Apple will be making some sweeping changes to the certificate program to prevent these types of abuses moving forward.
[doublepost=1550121551][/doublepost]

So apple is depending on honest devs to keep iOS users safe. Lol.

Really? That's your takeaway from this?

Apple doesn't allow public Apps outside of the App Store - the App Store is the first, best, line of defense against malicious apps and malware. Apple provides the developer program and enterprise certificate specifically for companies to create app for internal use only - whether for testing purposes or for intra-organization purposes were distributing via the App Store would be cumbersome. Apple can't stop Devs from violating the TOS before they actually violate them...but they can respond immediately once a violation comes to light.

Quite honestly, Apple can only protect it's user so much - if a user chooses to install an enterprise certificate and get an App that way, that's on the user, not Apple.
Score: 8 Votes (Like | Disagree)

Not surprising news about these enterprise certificates. Not the first time that I recall that they have made news for going against some TOS.
[doublepost=1550119903][/doublepost]
So Apple cracking down is because of loss of revenue rather than adhering to a TOS. Interesting spin on that.

Apple has been revoking these certificates on a continuous basis throughout these years, it wasn't until recently that they issued massive ban waves. Perhaps you should read my full comment before embarrassing yourself. And yes, I am allowed to speculate.
Score: 7 Votes (Like | Disagree)
Read All Comments