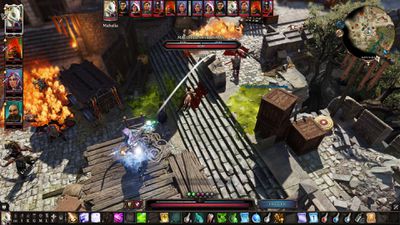 Developed in partnership with Mac porting studio Elverils and Apple's Metal engineering team, the acclaimed RPG from Larian Studios includes all the content from the PC version, along with a raft of additional features exclusive to Mac.

Examples of the latter include full MacBook Pro Touch Bar support for quick access to in-game actions (such as the journal or map), MacBook trackpad and selected gestures support, eGPU support, support for Apple MFi controllers and rumbling support on selected controllers, and iCloud support for easy backup between devices.


Since its 2017 PC release, DOS2 is one of only 15 games to receive a GameSpot 10/10 score. The in-depth sandbox adventure for up to four friends has also won a BAFTA in the Multiplayer category and is the highest rated PC game of 2017 on Metacritic.

Anyway, I just bought Pillars of Eternity 2 yesterday because they added a proper turn-based mode. And now this. You go forever without a decent RPG and suddenly there are two. ;)

Eric5h5
I don't know about compared to Windows, but with a Vega 56, I have all settings maxed out and it's always 60fps so far.

Manzanito
You can also get it on gog.com, if you dislike stunts like the one steam pulled off recently leaving users of older versions of macos unable to play at all the games they paid for, or you don’t want to wait forever for apple to accept a patch for the game on the mac app store.

Go to the Apple menu, then "About this Mac." If the "Graphics" section mentions Iris, Iris Pro, or has a four-digit number of 5000 or larger, the game should run. As far as I can tell, all MBPs from '16 should be good to go, though you may have to minimize graphical settings to get an enjoyable frame rate.

star-affinity
Will be interesting to see how well the game performs in MacOS compared to Windows on the same hardware. This being developed with help from Apple's Metal team maybe means it's not to far from how it runs in Windows. Because I can't imagine it to be better. Or can I? :)
Score: 1 Votes (Like | Disagree)

Uh... Owned this game since release, can confirm this comment has no basis in reality.
[doublepost=1548971464][/doublepost]

Anyway, I just bought Pillars of Eternity 2 yesterday because they added a proper turn-based mode. And now this. You go forever without a decent RPG and suddenly there are two. ;)

To be fair, Divinity: Original Sin (the first one) is also a pretty excellent RPG and that released in... 2014? 2015? Something like that.

Haven't played it myself, but from what I understand you're not going to be upset about buying Pillars of Eternity 2 either. :D
Score: 1 Votes (Like | Disagree)
Read All Comments