Taiwanese manufacturer Compal Electronics is expected to be a supplier of the so-called iPad mini 5 when the tablet launches later in 2019, according to DigiTimes. This would likely entail final assembly of the device. 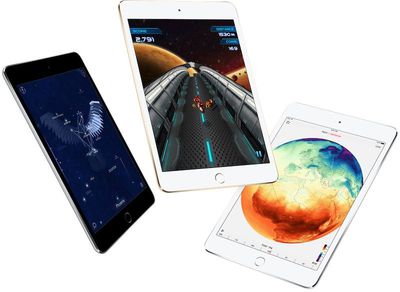 ‌iPad mini‌ 4
Rumors suggest Apple will release the new ‌iPad mini‌ as early as this spring, likely alongside a new seventh-generation iPad with a slightly larger 10-inch display. Apple's plans to release a new ‌iPad mini‌ have been reported by Ming-Chi Kuo, Mark Gurman, DigiTimes, and the China Times.

Kuo said the new ‌iPad mini‌ will feature an upgraded processor and a lower-cost panel, but few details are known beyond that.

nfl46
Give us an iPad Mini 5 and iPhone SE 2 with updated specs & a lot of people will be happy.
Score: 10 Votes (Like | Disagree)

I hope they won't go full penny-pinching again and use the old chassis (but seeing Cook's track record, I'm sure that's exactly what they'll do)

My bet is on it being thicker, lower quality screen for the same $399. And this new 10 inch iPad rumor will have similar crappy parts for $499.

Apple wants us to feel compelled to buy an iPad Pro. There’s no way they will give us what we want— a full-featured iPad Mini with a sub $500 price.
Score: 8 Votes (Like | Disagree)

otternonsense
I hope they won't go into full penny-pinching mode again and use the old chassis (but seeing Cook's track record, I'm sure that's exactly what they'll do)
Score: 6 Votes (Like | Disagree)

G5isAlive
The excitement builds... knowing that no matter what is released there are going to be three basic comments
1) who wants this? update the Mac Pro!
2) they cheaped out, I want a fully featured iPad mini Pro at half the cost!
3) its too expensive, I want just a basic device.

The minority will say, just what I have been waiting for!
Score: 3 Votes (Like | Disagree)
Read All Comments