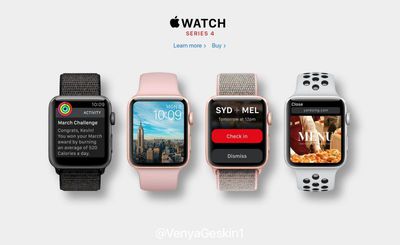 These model numbers likely correspond with the widely rumored Apple Watch Series 4 lineup, expected to be unveiled at an Apple Event in September alongside a trio of new iPhone models, new AirPods, and more.

In the past, similar filings with the Eurasian Economic Commission have been submitted for the lower-cost 9.7-inch iPad, 10.5-inch iPad Pro and 12.9-inch iPad Pro, iPhone 7 and iPhone 7 Plus, Apple Watch Series 2, AirPods, and 2018 MacBook Pro with Touch Bar, usually within one to two weeks before each product was released.

At this point, it was already pretty obvious that Series 4 models are coming next month, but the filings eliminate any remaining doubt.

The only unique aspect of this year's filings are that there are currently only six unreleased Apple Watch Series 4 model numbers, whereas the Series 3 lineup has eight model numbers: two aluminum GPS-only models, and six LTE models, including aluminum, stainless steel, and ceramic variants in two sizes.

Naturally, this has led to some speculation that there might not be ceramic Series 4 models, but there are many possibilities.

If past is predicate for the future, Apple will likely hold its next event on Wednesday, September 12, with invites to the media going out in the last few days of August. MacRumors will provide live coverage as usual.

Relentless Power
As long as my bands are compatible, I look forward to any other changes with the larger display and additional health sensors.
Score: 16 Votes (Like | Disagree)

JaySoul
Hope Apple don't hike the prices too much.

People really love Apple Watches, seeing more and more of them (albeit older models). Keep it accessible, it is helping people to put their health front and centre.
Score: 16 Votes (Like | Disagree)

I won a series 3 at work the other day. I have yet to open the box.

Maybe I should sell it and wait for the latest one. Not really a fan wearables anyways though so not sure what to do.

If you’re not interested in keeping it, I would sell it now, as you would still likely accrue more of a profit, because once the Series 4 is announced Assumingly, the Series 3 will drop in price and the market will be saturated with those wanting to sell their watches wanting to upgrade. But being your watch is new, that also helps.
Score: 15 Votes (Like | Disagree)

Dave245
Great news, i'm looking to update from my Series 0 to the Series 4 when it comes out. If they don't update the Ceramic i wonder if they will add another version for the Edition instead or just remove it from the line up?
Score: 12 Votes (Like | Disagree)

groovyf
Still got my Series 0 - and desperate to replace it. The Series 4 can't come soon enough.
Score: 11 Votes (Like | Disagree)

Monday January 24, 2022 7:12 am PST by Sami Fathi
Three months after their launch, the 14-inch and 16-inch MacBook Pros continue to experience high demand and seemingly short supply, with shipping dates for both models stretching into multiple weeks in several of Apple's key markets. In the United States, the baseline 14-inch MacBook Pro with the M1 Pro chip is estimated to ship in three to four weeks, promising an arrival by at least...
Read Full Article • 208 comments