The Eurasian Economic Union (EAEC) has issued new certificates for Apple products that suggest the company is set to release wireless earphones and multiple new versions of Apple Watch alongside the iPhone 7 and 7 Plus.

Manufacturers are required to certify electronic devices for sale in countries that are signed up to the EAEC treaty (ratified last year), which includes Russia, Belarus, Kazakhstan, and Armenia. Russian website iPhones.ru found a reference to "AirPods" along with other Apple certificates added to the regulatory body's digital products registry yesterday. 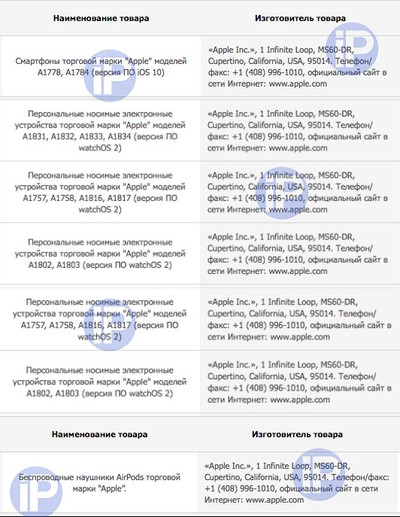 Last month, MacRumors revealed that an "AirPods" trademark filing discovered last October seemingly confirmed Apple's work on upcoming wireless earphones in lieu of a headphone jack on the iPhone 7. This latest regulatory certification appears to cement that finding, although whether Apple plans to bundle the AirPods with its new phones or sell them exclusively as a separate accessory is still unclear.

Elsewhere, the documents list several new certificates for Apple Watch (although oddly these are labelled as running watchOS 2, not watchOS 3, as would be expected for new models) and two certificates for products running iOS 10, likely indicating Apple's upcoming iPhone 7 and 7 Plus expected to be announced in a special event next week.

djcerla
If they remove the headphones jack, the only decision that makes sense in a philosophical way is to cut with the past (pun intended) and go completely wireless.

Airpods will be included, while the upsell option will be a revamped line of Beats wireless devices, with a male Lightning charging port.

Color me completely disappointed if the default earbuds are wired (Lightning). That's not a signal of change.
Score: 9 Votes (Like | Disagree)

Zimpaz
If Apple include wireless headphones in the box of the iphone 7 i will EAT MY HAT. no chance
Score: 5 Votes (Like | Disagree)

Apple wouldn't include wireless earbuds in the box considering they'll probably cost around £150-£200. Expect Lightning connected EarPods in the box and their AirPods to be sold separately.

I do not know, this may be the one time where Apple surprises a lot of us. Lightning headphones would just be a bad decision on their part. If they are removing the jack, theyll go wireless.
Score: 3 Votes (Like | Disagree)

idk.. I think they SHOULD be included. They will probably be of lesser quality or otherwise, why would anyone purchase Powerbeats wireless to go with their phones? At the price point some of us are expecting (if sold separately) one might as well buy the beats.

Apple wouldn't include wireless earbuds in the box considering they'll probably cost around £150-£200. Expect Lightning connected EarPods in the box and their AirPods to be sold separately.
Score: 2 Votes (Like | Disagree)

mtneer
Wow.. something new today. I'd never heard of a Eurasian Union.
Score: 1 Votes (Like | Disagree)