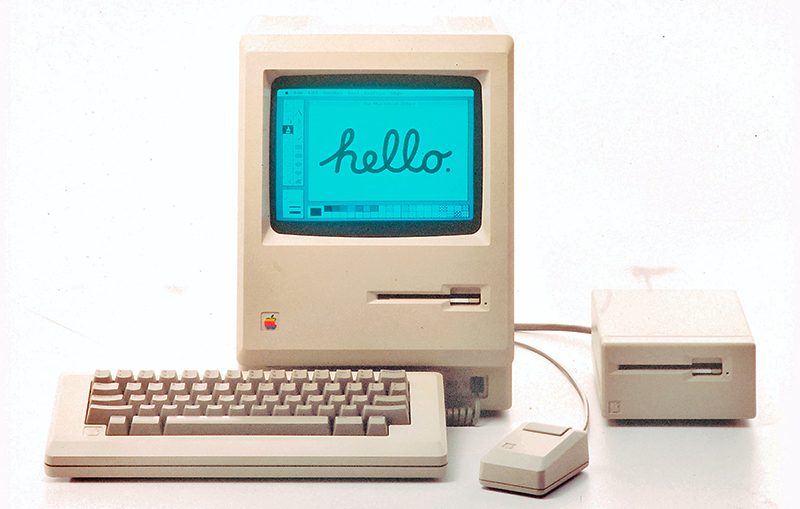 Jobs pulled the Macintosh out of a bag during Apple's annual shareholders meeting on January 24, 1984 at the Flint Center in Cupertino, California, grinning from ear to ear as the crowd erupted in applause.

Hello, I'm Macintosh. It sure is great to get out of that bag.

Unaccustomed as I am to public speaking, I'd like to share with you a maxim I thought of the first time I met an IBM mainframe: NEVER TRUST A COMPUTER YOU CAN'T LIFT!

Obviously, I can talk, but right now I'd like to sit back and listen. So, it is with considerable pride that I introduce a man who's been like a father to me… STEVE JOBS.


And here's a lesser-known video of Jobs introducing the Macintosh to the Boston Computer Society on January 30, 1984:


The original Macintosh was priced at $2,495 in the United States, equivalent to just over $6,000 today, and was a big deal because of its graphical user interface rather than command-line interface. Tech specs included an 8 MHz Motorola 68000 processor, 128 KB of RAM, and a 400 KB floppy disk drive.

Update: Apple CEO Tim Cook has tweeted in celebration of the Macintosh turning 35.

35 years ago, Macintosh said hello. It changed the way we think about computers and went on to change the world. We love the Mac, and today we’re proud that more people than ever are using it to follow their passions and create the future. pic.twitter.com/oUQDJN3jRU

otternonsense
It's Apple nowadays that needs a girl in jogging year to throw a hammer through the Infinite Loop cafeteria jumbotron.

Their entire product portfolio right now is the result of corporate groupthink and brazen nickel-and-diming.

Sad how they became everything they were standing against.

BigBoy2018
35 years. Just about enough time for maybe 5 iterations of the Mac Pro (at the current update pace)
Rating: 41 Votes

daveedjackson
Wouldn’t it have been a huge marketing event to launch the new MacPro today. Instead, no news, no rumours. No buzz. No interest. Professionals have been jumping ship for several years now after the joke that is the current nMp, with its custom everything, not upgradable or expandable in the slightest. Told it’s the best at launch, then when you’ve prted with your hard money Apple politely say “oops, we designed ourselves into a thermal corner” yeah no kidding. And no one thought to look at this?

I’ve been riddled with problems since day one. I’m yet to have a display which doesn’t glitch. New GFXBench cards and still glitches. Took to store to be told “we don’t have 4K displays to test”. What’s the point.
Rating: 33 Votes

Lmaooo what are you even talking about?

Apple products have always been more expensive than the competition. Apple has always been first to get rid of a port/drive.

The current products are great. Of course there are annoyances, but to say everything they do sucks... Thats just dumb.


Nope. It's not (just) about price. There was a time you could justify the "Apple Tax". Products were pricy but great. Before they started pushing trashy anaemic laptops with awful keyboards and gimmicky emojibars that can't connect to anything out of the box, outdated desktop Macs with default spinning drives in 2019, pre-bent iPads, €1200 phones with no fast chargers and plugs/earpieces that aren't compatible with Macs etc. Apple products had quality, elegance and interoperability other vendors could only dream of.

Not THAT long ago it wasn’t a problem to pay 399 for iPods, 499 for iPhones, 1599 for iMacs and so on. The product lines were clear and each upgrade provided immediate utility and value. Right now they are complicated, annoying and overpriced. That's exactly what got Apple nearly killed in ‘90 before Steve came back.
Rating: 31 Votes

meaning-matters
My first job was repairing them.
Was amazed by Apple employee signatures embossed inside the cover.
Seeing quality and beauty, of course I fell in love with Apple.
Rating: 28 Votes

MacFather
No game-changing products from Apple since Timmy took over in 2011. Only some nice accessories (Apple Watch, AirPods, Apple Pencil).
Rating: 27 Votes

Martius
What a sad anniversary in 2019. I hope the 40th will be much happier. Apple needs a new blood, somebody who cares.
Rating: 27 Votes

Janichsan
And if I see this correctly, Apple is once more ignoring this anniversary.
Rating: 26 Votes

Coming from Apple IIgs and Amiga 2000 the Mac SE addition was boring with no color and painfully slow especially with text scrolling since the BBS scene and early internet were predominantly text.


Well, 'predominantly text' wasn't exactly the Mac's party trick - back in those days my day job was sitting behind a VT220 terminal and that did scrolling text very nicely. In the 80s, an 80x24 character-generator-based screen was the norm for purely text-based work and a fully bitmapped screen/screen mode was a luxury that hammered the CPU and drank RAM.

The Amiga, of course, technically blew everything out of the water - and had hardware-accelerated graphics that could eat things like displaying/scrolling text on a colour bitmap screen for breakfast. It just had the bad luck to come at a time when businesses wouldn't look twice at anything that didn't run IBM PC software and Apple had secured the remaining niche in DTP, leaving the Amiga (undeservedly) as the most over-engineered games console in history.

Apple products have always been more expensive than the competition. Apple has always been first to get rid of a port/drive.


...and they've often been near failure as a result of pricing themselves out of the market, which has usually been averted by bringing out an 'affordable' option (The LC/Classic/IIsi in 1990, the iMac in 1998, and - to a certain extent - the original Mac itself c.f. the Lisa).

Apple's problem is that they come out with an innovation (Apple II, Mac, iPhone...) that justifies a premium price because, at launch, there's nothing else like it - then, years later, they're still trying to flog the incrementally-improved version of the same product at the same, or higher, premium, except now they're up against credible competition at half the price. Its been black-and-white in the last couple of quarters' results that they're extracting more money from a static, if not shrinking pool of loyal/locked-in customers. That's not sustainable.

...and yes, they dropped ports when they were obsolete, when there were better alternatives or when they created a new product category. Not to save a buck or to trim 1mm off the case thickness and enable bending. Not, "whups, we're going to all-USB-C, don't worry, there will probably be products that don't need dongles along in a year or three..."
Rating: 19 Votes

No game-changing products from Apple since Timmy took over in 2011. Only some nice accessories (Apple Watch, AirPods, Apple Pencil).