Wednesday January 23, 2019 9:51 am PST by Joe Rossignol
Target yesterday announced that all of its stores will begin accepting Apple Pay in the coming weeks, but it still won't be possible to add its store-branded REDcard debit or credit cards to the Apple Wallet app. REDcard is Target's loyalty program, offering an automatic five percent off most purchases everyday.

"REDcards cannot be added to Apple Pay as part of this rollout," a Target spokesperson confirmed with MacRumors today.

This means paying with a REDcard will still require inserting the physical card into the payment terminal or adding it to Target's mobile app and having the cashier scan a barcode at the checkout. The latter method requires opening the Target app and tapping on the Wallet tab to access the barcode. 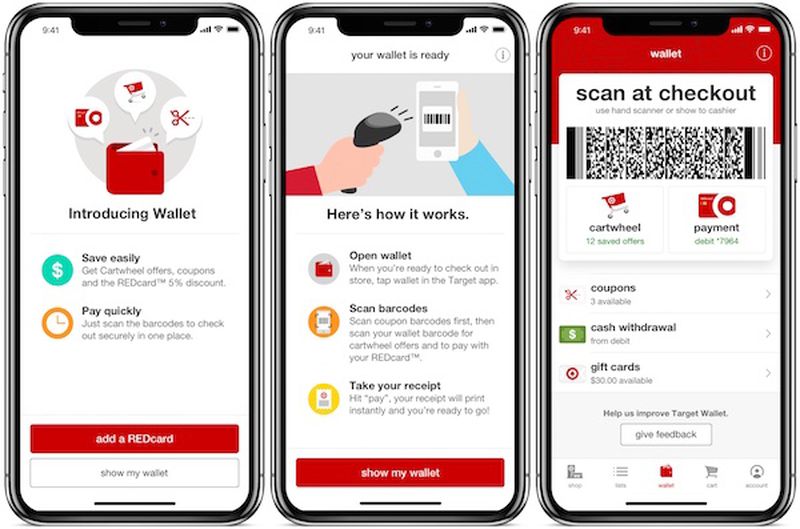 Both options are less convenient than ‌Apple Pay‌, which requires a quick double-click of the side button and authentication with Face ID on the iPhone X and newer, or briefly resting your finger on Touch ID on older iPhones.

Target already suggested that REDcards would not support ‌Apple Pay‌ on Twitter, but its "at this time" phrasing wasn't entirely clear.

Of course, Target could decide to allow REDcards to be added to the Apple Wallet app in the future. The retailer had avoided accepting Apple Pay entirely for several years until reversing course with this week's announcement, so it might be only a matter of time before it changes its mind again.

vicviper789
Gotta track their shoppers some how!
Rating: 12 Votes

yossi
Most likely because of the larger transaction fees charged if the red card is handled via Apple pay.
Rating: 10 Votes


Exactly. People get seduced by the 5% discount. But Target profits significantly from being able to track and commoditize absolutely every purchase, not only for themselves but presumably that they can also sell to data brokers. Conversely, Apple Pay is designed with the user's privacy in mind. As I understand it, for each transaction a unique payment number is generated and your personal information and credit card number is not shared with the merchant. Great for privacy and especially for security. I don't know if Apple has negotiated with merchants who have store cards to allow them to pass along data in these scenarios. I'm inclined to say they have not, especially in light of Target's stance in this situation.
Rating: 10 Votes

DblHelix
Can't they do something like Walgreens with their loyalty card? It is linked to a log in with user data and is pretty seamless with apple pay. Just tap and it goes first then a second tap to pay. They get loyalty info I get a reward.
Rating: 6 Votes

MacBoy88
Bummer. I was really hoping for this. I don’t think this is about tracking purchases as they could still do that with Apple Pay. I think it has more to do with fees.
Rating: 4 Votes

mattster16
Not really a big deal. If you use cartwheel you have to have them scan a barcode anyway. If you have the redcard in the target app they only have to scan one barcode and it applies cartwheel savings and the payment method all at once. Pretty convenient actually.

All in all I've saved thousands of dollars over the years by using cartweel and a redcard.
Rating: 4 Votes

Most likely because of the larger transaction fees charged if the red card is handled via Apple pay.


Apple does not charge transaction fees :

Bummer! I use my red card all the time. It would be helpful to not have to carry an extra card around for shopping only at Target though :<


Use the app. I store the card in the app and it’s one less card to carry now. I wish Lowe’s would do the same.
Rating: 3 Votes

Do you have a cashback card that has a 5% return on everything you buy at Target?