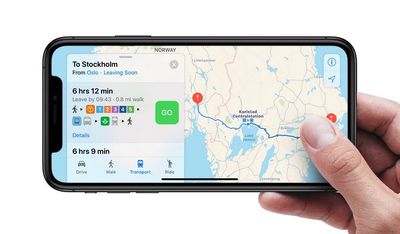 The coverage includes train, tram, and bus routes in the capital cities of each country, including Oslo, Stockholm, Copenhagen, and Helsinki, as well as funicular connections where available and transit links across borders.

Apple has yet to update its official list of locations for which Maps offers Transit data, but the information is already live across Europe.

Google Maps has supported transit directions for several years now, but ‌Apple Maps‌ has been steadily catching up with detailed routing information in recent years.

Transit coverage began in 2015 with an initial rollout in Baltimore, Berlin, Boston, Chicago, London, Los Angeles, Mexico City, New York, Philadelphia, San Francisco, Sydney, Toronto, and China. Since then, Apple has expanded the feature to many other regions around the world.

(Thanks, Bernd and Noah!)

Ok, so I just tried this with the route I take every day. It tells me to go off the train a station too early and then walk for 3.3 Km when I could just continue to the next station and take a buss that would drop me less than 100 m from my destination. Google maps gives me the correct path. (This is in Sweden)

Check if Apple Health setting is on in options;-)
Score: 8 Votes (Like | Disagree)

Ok, so I just tried this with the route I take every day. It tells me to go off the train a station too early and then walk for 3.3 Km when I could just continue to the next station and take a buss that would drop me less than 100 m from my destination. Google maps gives me the correct path. (This is in Sweden)

Up to you, but you can report it to Apple. They’re pretty good about fixing these, and the app usually comes back to tell you it’s been fixed within a week.
Score: 6 Votes (Like | Disagree)

Why is Apple so behing Goole on this and what takes them so long to expand their coverage? TERRIBLE.

Because the data is way better for Transit at least also I don't think the roll-out is going slowly anymore in the last 2 months they added over 5 countries.
[doublepost=1548080062][/doublepost]

As a global maps app it's a lost battle, might work fine here and there, but they are so far behind in data. Street names and turns when too long take about half the screen's height, the arrow icon many times won't even sync real time with the map you have to constantly refresh it to keep up.

Is it though? It started as one of the worst experiences I've had with any map app. It's now my go to at least here in Europe.
Score: 4 Votes (Like | Disagree)

PimpDaddy
Nice! Can't wait to test it out when getting around in Copenhagen. If they could now just add bicycle routes I can finally get rid of Google Maps :)
Score: 3 Votes (Like | Disagree)