According to Netgear, the Wi-Fi 6 version of the Orbi will allow for new performance benchmarks for Mesh Wi-Fi systems, delivery sustained gigabit wireless speeds across the home. 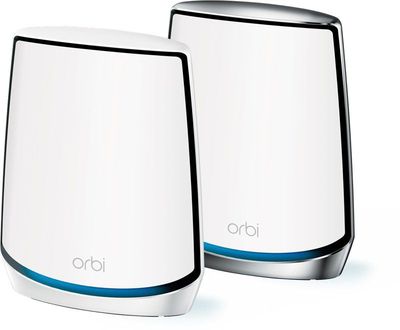 For those unfamiliar with Orbi, it is a multi-node mesh Wi-Fi system much like the Linksys Velop that Apple sells in its retail stores. With Orbi, the idea is to set up multiple Orbi access points throughout the home to ensure high-speed Wi-Fi coverage in all rooms.

Wi-Fi 6 is the latest version of the Wi-Fi protocol, which will be baked into future computers, smartphones, tablets, and other devices. Accessories with Wi-Fi 6 support connected to a system like the Orbi will be able to achieve higher data transfer speeds.

No Apple devices take advantage of Wi-Fi 6 at this time, but it's likely to be built into future iPhones, iPads, and Macs.

Netgear says that its next-generation Orbi system is ideal for households that have a "multitude" of connected devices running high-bandwidth internet for purposes like 4K video streaming, always-on smart home devicds, and video monitoring security systems.

The Orbi with Wi-Fi 6 will be available in Netgear's Orbi RBK50 series in the second half of 2019.

Solomani
LOL still loving my (now discontinued) Apple Airport Extreme base station. It will do fine for a couple more years, and by then all computers (Macs and PCs) would fully support the new n Wi-Fi 6 802.11ax ('https://www.netgear.com/landings/ax-wifi/#orbi') standard.
Score: 9 Votes (Like | Disagree)

TTTedP
and they still look awful.
Score: 8 Votes (Like | Disagree)

pier
I have the current version and it's just awesome. The units are a bit bulky other than that I have zero complaints. Fast, long range, and easy to use.
Score: 6 Votes (Like | Disagree)

jazz1
I've got the older version and it works great. The one near my living room window broadcasts far into my back yard.
Score: 6 Votes (Like | Disagree)

Mesh networks seem like such marketing hype, what's the difference between mesh and router + access points/extenders? I have Google Wifi with 2 points and honestly it's no better than my Airport Extreme + Airport Express was.

I have the Orbi RBK50 that is sold at Costco. What's special is you get one unified network to sign into - no 'My House 2.4G' 'My House 5G' 'My House 2.4 EXT' 'My House 5 EXT' like you do with access points and range extenders. So all your devices, regardless of whether they are 2.4 or 5G, all sign into one single network. In addition, the mesh systems automatically configure your "relays" once you place the units and turn them on, e.g. they automatically configure if the hubs connect directly to the main unit, or if they daisychain with each other for best coverage.

I've had my system for the past year now and it's been life-changing in my 3,400 SF two story home. No more dead spots, no having to switch to different wifi networks when changing rooms, and fast speed everywhere.
Score: 4 Votes (Like | Disagree)

MN7119
I have the current Orbi RBK50 (Costco version that comes with main unite + 2 satellites). Although the units looks awful and it is a huge piece of plastic the system is fantastic. I live in a 4k sqfeet home and I get coverage up to 2 houses away from my house.
Score: 4 Votes (Like | Disagree)
Read All Comments