In a press conference at the White House this afternoon, U.S. President Donald Trump weighed in on Apple's recent revenue woes, suggesting the company will "be fine" despite its downgraded Q1 2019 guidance.

When asked about Apple's announcement and its potential impact on the U.S. economy, Trump erroneously said that Apple has "gone up hundreds of percent" since he's been president. "Apple was at a number that was incredible and they're going to be fine. Apple is a great company," Trump said.

Apple has not, of course, seen a "hundreds of percent" increase in its stock price, with the number instead at around 20 percent since Trump's January 2017 inauguration.

Trump went on to say that he's unconcerned about Apple because its devices are made "mostly in China," seemingly blaming that fact for Apple's financial issues. He also once again reiterated that should Apple move its manufacturing to the United States, and suggested he's friends with Apple CEO Tim Cook.

Apple outlined many reasons for the change in its guidance, which is now at $84 billion and down from the $89 to $93 billion November estimate, but manufacturing problems in China were not among those reasons.

Instead, Apple said that the issue was caused by Chinese consumers not purchasing iPhones, which is unrelated to where iOS devices are assembled.

According to Apple CEO Tim Cook, rising trade tensions between the U.S. and China caused by Trump's trade war have had an impact on Apple's bottom line. Back in November, Trump suggested that a 10 percent tariff could be implemented on iPhones and laptops imported from China, but thus far, additional tariffs have not been imposed.

ericgtr12
You bet, and we'll also have a border wall funded by Mexico, "the best people" who won't end up in prison and the best most bigly stock market even known to man.
Score: 63 Votes (Like | Disagree)


"Trump erroneously said that Apple has "gone up hundreds of percent" since he's been president."Percent' ('https://www.macrumors.com/2019/01/04/trump-apple-earnings-downgrade-comments/')

Your president is an imbecile.

One of the factors that have brought it down is the China/US trade war, but he won't acknowledge that.
Score: 46 Votes (Like | Disagree)

bigandtasty
Love that look on Tim's face, makes me laugh every time I see it. Reminds me of Beaker from Muppets...
Score: 44 Votes (Like | Disagree)

BB8
Cheap words coming from the guy who is responsible for much of the market's recent volatility.
Score: 34 Votes (Like | Disagree) 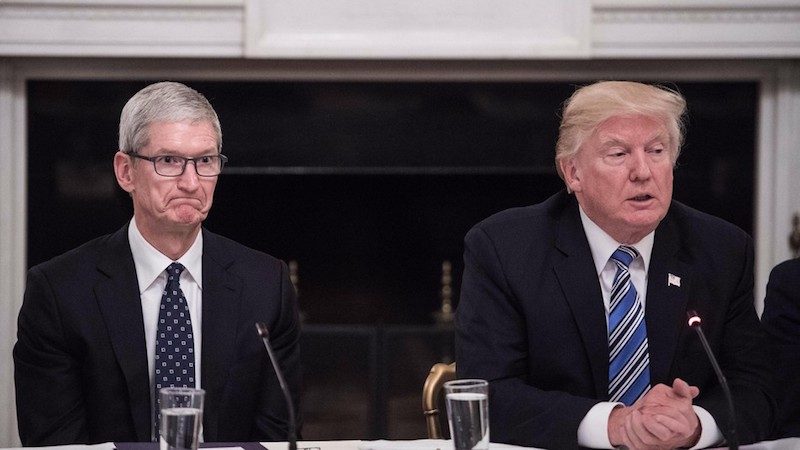