Apple today updated its investor relations page to announce that it will share its earnings for the first fiscal quarter (fourth calendar quarter) of 2019 on Tuesday, January 29.

Along with the notice on when to expect earnings results, Apple today also announced revised guidance for the first fiscal quarter, which will make the January earnings call an interesting one. 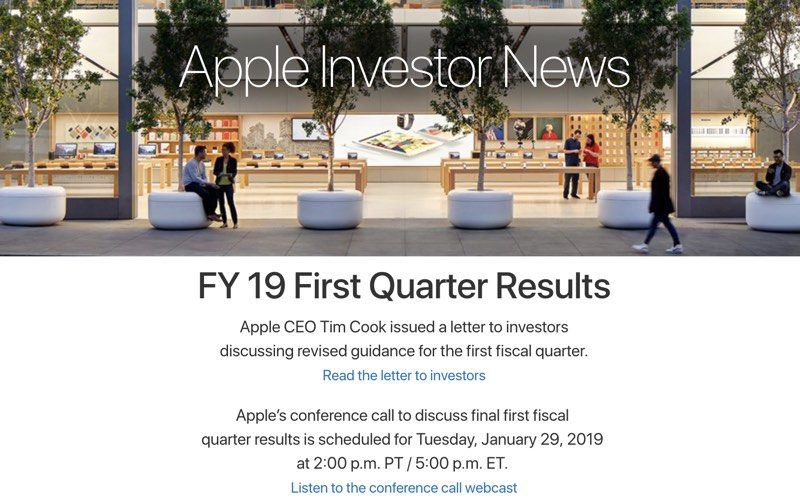 Apple now expects revenue of $84 billion and gross margin of 38 percent, down from a guidance of $89 to $93 billion provided in November during the fourth quarter earnings call.

Apple CEO Tim Cook provided several reasons for the drop in an open letter to investors:

The earnings call will provide more detailed information on Apple's revised guidance, though the January 29 earnings report will be the first without specific unit sales data for iPhone, iPad, and Mac, which Apple said it would stop providing back in November.

It marks a major change in the way that Apple's sales data is reported, making estimating iPhone, Mac, and iPad product sales more difficult. At the time the change was announced, Apple CFO Luca Maestri said that the company does not believe unit sales over the course of a 90-day period are an indicator of the underlying strength of its business.

Apple CEO Tim Cook today provided CNBC with a little more info on its decision, pointing out that the company never offered Apple Watch sales data because of the price range and the lack of value in sharing sales numbers. The iPhone, Cook says, is now in the same position.

It's sort of like you and I going to the grocery store and putting things in our cart and coming up to the register and the person saying 'how many you got'?

It doesn't make sense to add them together anymore because the price ranges are so wide. We didn't do it on watch from the beginning. We've never done it on iPod.

As we now step back from the phone, we now have phones being sold in emerging markets like the iPhone 6s for around $300 and so you've got a range from $300 to $1000 or in some cases over $1000 depending upon your selection of [storage]. And so this thing has lost its meaning.

Cook says that the sales data that it was providing to investors was conflating its value and its usefulness to determining the state of Apple's business.

According to Cook, Apple doesn't plan to never comment on units again and will provide data on unit sales if it will better explain results.

Apple is going to make additional disclosures, such as gross margin of services, a business that has grown significantly in recent years.

AutisticGuy
I know it sounds terrible, but I want a poor earnings report. I want Apple to get the message they are moving in the wrong direction.
Score: 26 Votes (Like | Disagree)

macfacts
Interesting that Tim did not list $1k iPhones as a reason for less earnings but listed a $30 discount on battery replacement as a reason for poor earnings.
Score: 23 Votes (Like | Disagree)

Low-priced battery replacements more like the public found out the secret and no longer need a new phone every 2 years.
Score: 21 Votes (Like | Disagree)

dominiongamma
Hiding the bad iPhone numbers, Apple was all transparent when making profit on iPhones now they won’t disclose the bad numbers.
Score: 16 Votes (Like | Disagree)

macfacts
Looks like Tim knew all this when he announced no more numbers regarding iphones sold.
Score: 15 Votes (Like | Disagree)

simonmet
I think it’s funny if their strategy to grow revenue by pumping up prices and margins has backfired. People are getting fed up with greedy Tim.

I’d have bought a new Mac if the prices were 15-20% lower, but I held onto my cash because I don’t want to support Apple gouging their customers.
Score: 13 Votes (Like | Disagree)
Read All Comments