Following the news that iPhone sales were down during the month of December leading Apple to cut its guidance for Q1 2019, the company is aiming to soften the blow with some positive news. 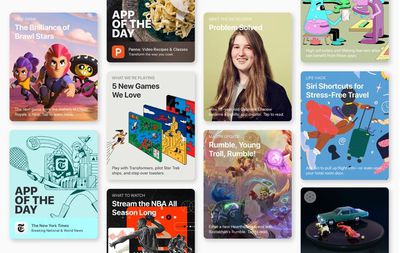 "The App Store had a record-breaking holiday week and New Year's Day. The holiday week was our biggest week ever with more than $1.22 billion spent on apps and games, and New Year's Day set a new single-day record at more than $322 million," said Phil Schiller, Apple's senior vice president of Worldwide Marketing. "Thanks to the inspiring work of our talented developers and the support of our incredible customers around the world, the App Store finished off an outstanding 2018 and kicked off 2019 with a bang."

Gaming and self-care were the most popular app downloads and purchases during the holidays. Fortnite and PUBG were some of the most downloaded games over the holiday period, along with Brawl Stars, Asphalt 9, and Monster Strike.

According to Apple, the App Store drove its services category revenue to a new all-time record during the holiday quarter, with multiple Apple services that include the App Store, Apple Music, Cloud Services, Apple Pay and the App Store's search ad business setting new records.

With Apple selling fewer iPhones, the company is hoping investors will shift focus to other areas of its business. Apple in November said that it will no longer provide unit sales data for the iPhone, iPad, and Mac, but yesterday said other information, such as gross margin of services, will be provided.

Kanyay
lol stock goes crashing so pr team goes nuts putting out good info about other stuff smh apple ya aint fooling anyone. even northwest sees thru this.
Score: 8 Votes (Like | Disagree)

seatton
The PR team and Timmy working really hard to get the stock price up to over $200 / s
Score: 7 Votes (Like | Disagree)

Wags
Exactly, trying to forget about their decisions. Invest in other areas? Like Mac OS and hardware. Ha ha. Apple just collects profit on everyone else’s work on the App Store. Maybe they should open up the vault and give us awesome products instead of bread crumbs year over year.
Score: 7 Votes (Like | Disagree)

You are not the only person that uses Apple devices.
Score: 6 Votes (Like | Disagree)

JPack
We get it, Apple. Revenue in Services is growing.

The problem is hardware has plateaued and is expected to drop faster than Services can keep up. And Services relies on Apple hardware.

Not to mention there's a lot more competition against Apple Pay and Cloud Services.
Score: 5 Votes (Like | Disagree)

Exactly, trying to forget about their decisions. Invest in other areas? Like Mac OS and hardware. Ha ha. Apple just collects profit on everyone else’s work on the App Store. Maybe they should open up the vault and give us awesome products instead of bread crumbs year over year.

You, uh, don’t know what you’re talking about. Look up iOS SDK and realize Apple engineers made that.
Score: 4 Votes (Like | Disagree)
Read All Comments