Apple today released iOS 12.1.1, the third update to the iOS 12 operating system since its September launch. iOS 12.1.1 is a minor update that follows iOS 12.1, a more significant release that brought features like Group FaceTime, initial eSIM support, and new emoji.

The iOS 12.1.1 update is available on all eligible devices over-the-air in the Settings app. To access the update, go to Settings > General > Software Update. As with all iOS updates, iOS 12.1.1 is free to download. 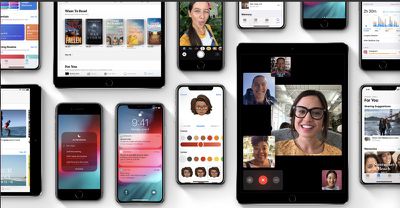 FaceTime also includes a reworked bottom bar that offers up quick access buttons for muting a call and flipping the camera. Sliding up on the bottom bar brings up additional options with conversation participants.

Prior to today's update, FaceTime users were required to tap on three dots to access a secondary menu with these features, so this greatly streamlines often used options.

eSIM support on the iPhone XS, iPhone XS Max, and iPhone XR has expanded to additional carriers across Europe in iOS 12.1.1, including Swisscom in Switzerland, Orange in Spain, and Three in Sweden and Denmark. We're checking to see if Verizon, AT&T, and T-Mobile have added support for this feature.

ECG mention in Health app on iOS 12.1.1 via MacRumors forums
iOS 12.1.1 also adds a new option in Apple News to hide the side bar on the iPad when using the app in landscape mode, it introduces an option to turn off the physical SIM in the device in favor of the eSIM, and it tweaks the icon of the Apple Watch app so it looks like the Apple Watch Series 4.

iOS 12.1.1 adds features and fixes bugs for your iPhone and iPad. Features and improvements include:

- Notification preview using haptic touch on iPhone XR
- Dual SIM with eSIM for additional carriers on iPhone XR, iPhone XS, and iPhone XS Max
- One tap to flip between the rear and front-facing camera during a FaceTime call
- Live Photo capture during one-to-one FaceTime calls
- The option to hide the sidebar in News on iPad in landscape orientation
- Real-time text (RTT) when using Wi-Fi calling on iPad and iPod touch
- Stability improvements for dictation along with VoiceOver

This release also adds features and fixes bugs for HomePod including:

MrGimper
The update everyone without a heart issue has been waiting for.... Moan about no ECG support, now perform an ECG, and then never do it again.
Score: 19 Votes (Like | Disagree)

Why is the Haptic Touch notification limited to the iPhone XR?

Because every other phone has 3D touch instead.
Score: 14 Votes (Like | Disagree)

Cameront9
Thank God they fixed flipping the camera, that was seriously annoying.
Score: 13 Votes (Like | Disagree)

You know, if Apple provided an API for the haptic motor, we could race the XR around like a little remote control car.

antiprotest
Anyone interested in whether the update is showing up on my devices, whether I am downloading, and the download progress? If you beg me I will let you know. /s
Score: 8 Votes (Like | Disagree)
Read All Comments