Apple moved some of its marketing staff off other projects to focus on bolstering sales of the latest iPhone lineup in late October, around the time the iPhone XR launched, according to Bloomberg's Mark Gurman. 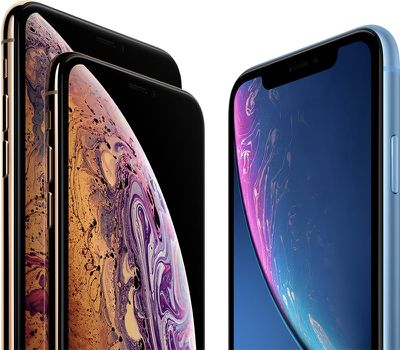 The report cites an unnamed person familiar with the situation who described the move as a "fire drill" and "a possible admission that the devices may have been selling below some expectations," a concern shared by some analysts and investors. Apple's stock price has plunged nearly 17 percent since November 1.

Apple is certainly marketing the latest iPhones more aggressively than in previous years. A banner at the top of its website advertises the iPhone XR "from $449," but with an asterisk, as that price requires trading in an iPhone 7 Plus for a $300 credit as part of a limited time promotion rarely seen from Apple.

Apple is really pushing the iPhone XR it seems. "From $449" banner on its homepage (after trade-in of course!) pic.twitter.com/zU5qiuoA7g — Joe Rossignol (@rsgnl) December 3, 2018

These concerns are nothing new following iPhone launch season, with the doom and gloom often fueled by weakening forecasts from iPhone suppliers.

Cirrus Logic, a supplier of audio-related components for iPhones, expects its revenue for the current holiday season quarter to be around 16 percent lower than it originally forecasted due to "recent weaknesses in the smartphone market." While not named, Apple accounts for around 80 percent of Cirrus Logic's business.

Apple CEO Tim Cook has dismissed those supply chain reports in the past. During an earnings call in January 2013, he noted that the company's supply chain is very complex and that conclusions shouldn't be drawn from singular data points:

It certainly doesn't help that Apple recently announced that it will no longer disclose iPhone unit sales in its quarterly earnings results, leading some to believe that iPhone sales have peaked and Apple has something to hide.

Apple's financial chief Luca Maestri said unit sales are "not particularly relevant for our company at this point," as they are "not necessarily representative of the underlying strength of our business." He did note that Apple may provide qualitative commentary if the info is valuable to investors.

While there were similar concerns about the iPhone X, that device ultimately sold well, so time will tell whether these headlines are baseless again. However, analysts will now have to rely exclusively on iPhone revenue to gauge sales, so the situation will no longer be as transparent going forward.

Apple has yet to announce a date for its next quarterly earnings report, but it will likely be released at the end of January. Apple expects revenue of between $89 billion and $93 billion, which would be an all-time company record.

rjtyork
Whoops! We made the iPhone 7, 7+, 8, 8+ and X too powerful. Now people are actually holding on to their phones for longer than 2 years. Better screw up the next update and make them slow so people are forced to upgrade!
Score: 47 Votes (Like | Disagree)

FSMBP
Regardless of what anyone says, Steven Jobs did work at Apple. He obviously affected something. Yes, he did pick Tim Cook at the time to be CEO; then again, he also picked Scott Forstall to run iOS. To say Apple still has the same magic as it with Steve, is to say Steve didn't do anything. Which we know is false.

Apple was always expensive but justified. Now, they're increasing prices by 20% and offering less.

Apple is about experience. Well, they used to be about it.
Score: 41 Votes (Like | Disagree)
Read All Comments